It was my mothers birthday and of course she wanted to go out for dinner.  She originally tired White bait.  However, it was fully booked for a function so she decided she wanted to go to Chameleon.  I have been here numerous times as it use to be Mum’s favourite restaurant.  However, as time has gone on Mum has not been there as frequent as she use to.  The place has had a very recent remodel and looks a lot different and more modern.  The restaurant was not as busy as some other places and maybe because it is connected to a hotel or it just could be because of the location.

Chameleon has also changed their approach to a restaurant meal and have freshened up the menu.  There are no longer the traditional starters, entree, main and dessert menu.  There is now a plate menu, where the plates are generally all the same size and are smaller servings as a main meal, but bigger than a entree serving. However, on the menu it still has the starters, sides and dessert.

So my mother and I both decided to order two plates each and a half dozen of bluff oysters.

A very nice starter.  It was a pan fried melted cheese and then moulded into a cone and had avocado, corn and some tomato, with snow pea shoots and reduced balsamic.  Very nice and tasty.  However, was difficult to eat with my fork and ended up using my fingers 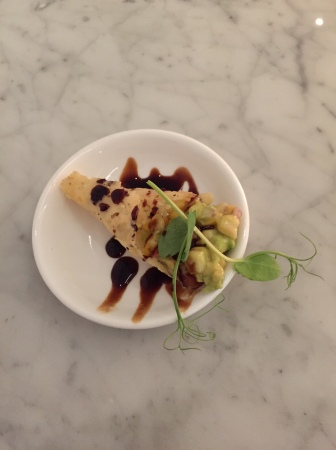 What can you say about raw bluff oysters.  Yummy!  Beautifully presented on a ice bath with two sauces; shallot & chardonnay vinegar and frozen gazpacho.  Having the two sauces were a great much especially with the shallot and chardonnay vinegar. Could have eaten two dozen easily. 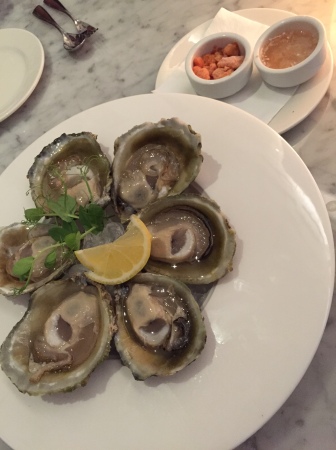 Now if you have read my other posts.  I love Four Cheese sauce.  I was pretty excited to order this dish.  I was slightly apprehensive though because gnocchi when served at times can be pretty bad.  However, I thought due to where we were eating it should be fine.  It was well presented with the crisp leeks, green olive & fresh tomato tapenade with the olive crumb.  It was not at all salty and the gnocchi was very nicely cooked.  Overall a very nice dish. 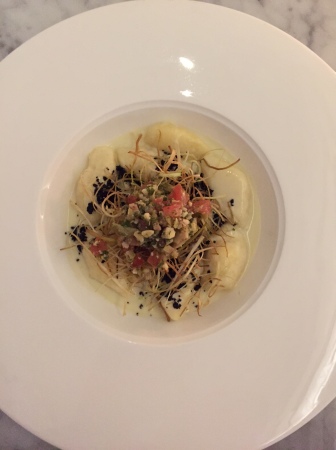 Also I am a sucker for liver, espeically if it comes from a bird. The sautéed liver was beautifully cooked and nice and pink and well seasoned.  I am sorry but liver, with bacon, mushroom and cream is a great match.  I know a lot of people cannot even think of eating liver, but it is just so yum and they cook it here very nicely. Oh, you cannot forget the bread.  They make the bread on site I think and the thyme flavour really does suit the dish when you dip the bread in the sauce. Yummy!

When I made the booking.  Chameleon asked me the reason for the booking and I said it was because it was my mother’s birthday.  I was not expecting anything in return.  However, at the end of the meal they gave my mum some petit four.  There was a macaroon, and two chocolates.  It was very beautiful.  The macaroon was nicely made, and the milk chocolate was filled with caramel and the white chocolate was a white chocolate truffle.  There was also caramelised cream with some fresh fruit and biscuit crumbs all over the plate and if you got a bit of cream and then got the cookie crumbs, it was very nice combination. 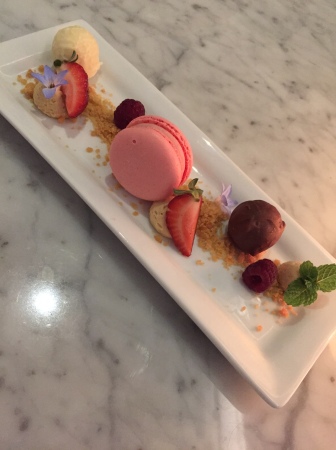 Overall Chameleon has not lost it’s charm.  It is still a very nice restaurant.  I just think because of it’s location not many Wellingtonians go there only people staying at the restaurant which is a bit of a shame.  The service is very good and everyone was on top of their game.