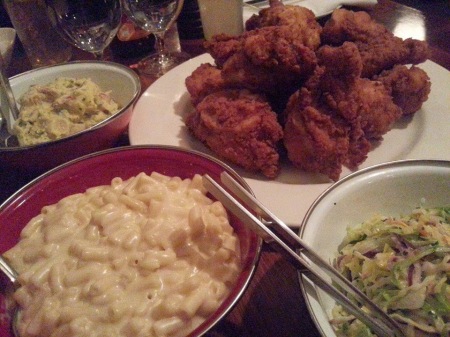 Rockwell & Sons Fried Chicken was the place to be.  Originally it was meant to be a week later but I got notified that they had to bring it forward a week.  They asked if i wanted a refund and I firmly said no way.  So the event was sold as;

fried chicken “family style” served up along with Southern-style sides of Iceberg lettuce, mac ‘n’ cheese, house pickles and devilled eggs plus “Buttermilk Biscuits” (the most bad-ass buttery scones you have ever encountered).

I was excited.  I had actually visited Rockwell & Sons in Melbourne and I was impressed with the place.  So I slightly knew what I was getting into.

So we arrived and were seated at the dinning section of St John’s bar.  We had our drinks ordered and delivered and the food finally came.  It actually took a while for the food to arrive after taking our drinks order, over 25 minutes actually.  I had been told that St John’s kitchen staff were kicked out of the kitchen for the event so Rockwell & Sons had somewhere to cook.

The food finally came and first off I was surprised how much food we were given.  The Fried Chicken (four pieces given to each person), coleslaw, potato salad and macaroni cheese.  To be a true southern man I added hot sauce to the chicken.  First taste I was blown away.  The skin was crisp and the chicken was really moist and full of flavour.  It was good, finger licking good.  The potato salad was creamy and delicious.  Coleslaw was average and the mac and cheese even though it was very good it did have a slightly sour taste to it, which if it wasn’t there would have been fantastic.    I did struggle to eat the four pieces of chicken but I did and so did everyone at my table.  I was kind of blown away. 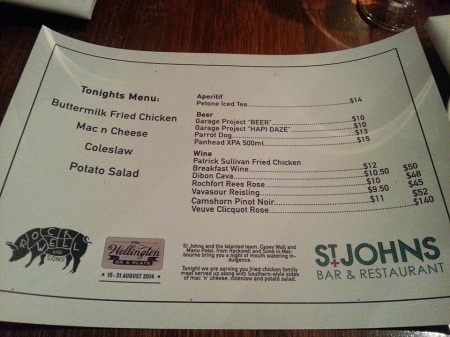 Now looking back at the event.  I am actually pissed.  Even though the chicken was the main event and was fantastic.  Where was the promised house pickles and devilled eggs and Buttermilk Biscuits.  I wonder what I can do about that, but i suppose somewhere in the small print it will say “menu can change on the day”.  Overall a great experience and one of my highlights to Wellington on a Plate.