My friends went to try Whitebait when I was in New York last December. I was actually quite jealous as I wanted to try it and never knew when I would be able to try it. However, my friends decided that they wanted to go back and have it again and celebrate my Birthday there. I was excited as they talked it up quite a lot when I arrived back from NYC.

I originally thought we were going to have a table of four. However, when I arrived my friend had organised a table of six and it was great to see everyone there and made the dinner more entertaining. When we arrived the waiter already knew I was the one that had a peanut allergy and went through the menu with me ensuring that the dishes I wanted to order did not have peanuts in them. 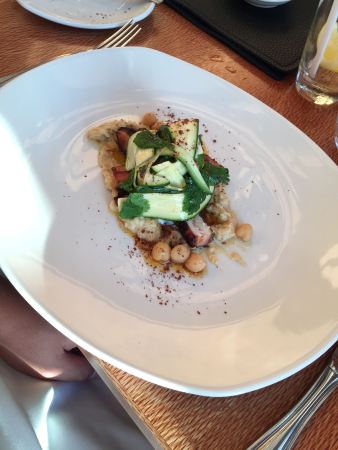 This dish was beautifully presented. The zucchini was thinly sliced on top with the grilled octopus below it, with cheap peas and hummus at the bottom with the yogurt in the middle. The Octopus was cooked beautifully with a nice chargrilled flavour that was not overpowering. Also it was nice to have both the whole chickpea and humus as it made it easier to eat as the chickpeas stuck to the humus and yoghurt. I could imagine that chickpeas rolling off the fork without the humus. The Octopus, zucchini, chick peas and yogurt worked really well together. 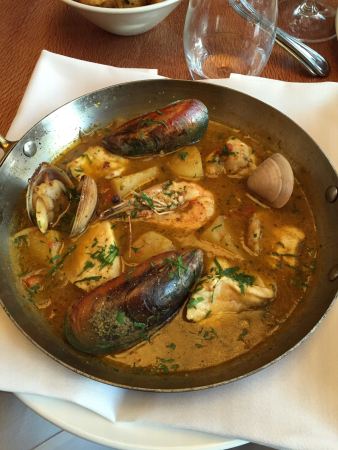 This also was a very nice dish. However, a bit of bread would have not gone a miss and maybe a few more pieces of fish or seafood. The broth was beautifully flavoured and very aromatic. The saffron flavour came through so did sweetness of the onions and it was not too fishy. The seafood was cooked beautifully with the fish still very moist and not at all overcooked as to was the shellfish and prawn. Overall the dish was very nice and had some great flavours to the dish.

Rosemary and Garlic Potatoes
All I have to see is they were roasted really nicely, they were crisp but not dry and the flavouring of rosemary and garlic was great. 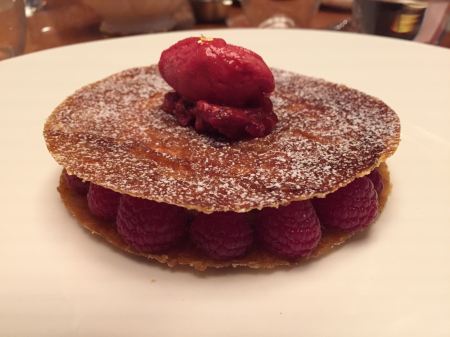 This was the highlight to my dinner, it was fantastic. The pastry was super thin and the raspberries were super fresh and the cream patisserie was beautiful. With the combination of the raspberry gelato the dish was just fantastic and the winner of the night.

Overall the food and company was fantastic.  The service was very good and one person in party liked our waiter more than the others.  If you are not a fan of garlic, I am not 100% sure if you would like this place.  It has an open kitchen when they fry the garlic it carries everywhere, I am not complaining as I love the smell of garlic.  Also one of my colleagues was there on the same night, she liked the food.  However, she did not like the area she was sitting in as it felt too enclosed compared to where my party was sitting that had a very high ceiling.  The menu changes regularly and hopefully I will be able to go again soon