V and I went to Crab Shack for dinner before we went to go to a movie.  We tried last week but it was busy so we tried again. We arrived just before 6 and we managed to get a table but it was a high table as there was no normal tables available.  The menu at Crab Shack Wellington is quite extensive and I found it very hard to decide, as I wanted to try so many things.

I ordered this purely because someone else ordered it next to me and I wanted to try it.  It came with a stack of corn chips as they were the size of a tortilla.  You had the option of the waitress smashing them or you an leave them whole, I decided to leave them whole.  They were very nice corn chips, thick and good texture to them.  The dips were also very nice;  guacamole was fresh and had good amount of seasoning, crab & corn was also very nice and had a good amount of crab in it and finally the indian pumpkin dip was nice as well but did not taste like it had any spice in it.  What was even better I discovered was if you put all three dips together on a corn dip.

This looked nice with good seasoning and colour.  However, the cook was too heavy on the seasoning especially when you got to the bottom.  It was very sweet and tasted like calamari with chicken salt, which was not a good mix.  The calamari was fresh, but after eating two or three of them it because quite difficult and rich.  A real shame!

I am not sure why I changed my mind at the last minute to order the burger instead.  However, I was not disappointed I did.  It was very nice and was a big burger, but slightly annoying as I had to use cutlery to eat it. It had a nice tasting patty.  However, was unfortunately fully cooked and no pinkness to it.  The bacon was well cooked, but slightly too crisp with some black char-grilled parts to it.  two leaves of lettuce which was very nice, pickle, shack relish and smoked provolone cheese.  The burger also came with some creamed corn, which was interesting to have, but was nice and had a lot of chilli in it and gave it an interesting kick and some steak fries.  Fries were typical McCleans steak fries, nothing special and rather disappointing only ended up eating three of them, but generous serving.

I only had a bit as was rather full from the corn chips and the burger. Was a nice dessert, but slightly too creamy for my liking.  Had a nice mint taste to it as it had finely cut mint leaves sprinkled on top. 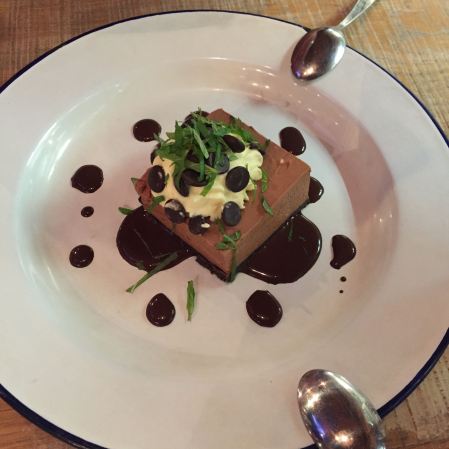 Overall a very nice place and looks like it is a successful eatery as the restaurant became very fully just after 6 and people were turned away as they could not be bothered waiting.  It seems like a lot of people in big groups like coming here as there was a huge table of over 20 in the restaurant.  Also many different people come here, from Uni students, suits, tourists and couples.  Looks like it attractions a wide range of people.  Also as a side note while surfing their website, I looked at their Auckland menu and it is quite a bit more expensive compared to the Wellington location.  Interesting!