Talking to my second cousins in the US  I asked if they liked either Shake Shack or In and Out. They actually said how about Five Guys, I had tried them before but had forgot what they tasted like, and as I had saw one that day I decided to go back and try it the next day. 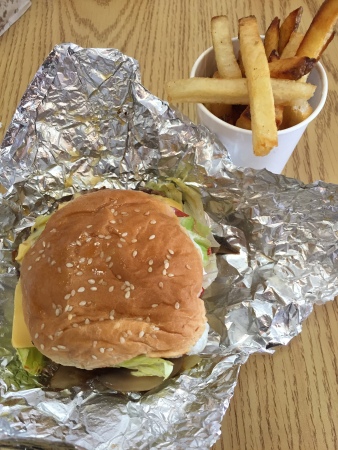 So was not overly hungry but thought I should eat something before I go to my cousin’s wedding. I thought something small would be a good choice. So I ordered the little bacon cheese burger. Well,the fist mistake while being in America.  The burger was quite big. The burger is made to order and you can add free extras and I just went with the typical ones like mayo, gherkins, grilled onions, lettuce, ketchup and mustard. You also get mushrooms and can get different salsas, hot sauce and jalapeños if you want for free. Overall it was a very nice burger which wa fresh and loved the addition of fried onions and mushrooms.

The fries are nice and crisp and are slightly thinner than medium cut fries  I liked them but not overly as they are cooked in peanut oil and even though I can eat things cooked in peanuts, I am allergic to peanuts

Overall not sure what I like better between Shake Shack, In and Out and Five Guys, but maybe I will before I head back to NZ  The burgers here are good and have a lot of free extras too them.  You also can get free peanuts in the shell to eat while you are waiting for your burger.  Five Guys are located all over the States, which is slightly different to In and Out and Shake Shack. Would I go back, yes I would but I want to see which one I like better  between the other burger outlets mentioned previously. I