My cousin “Phoebe”knew that I liked American southern food so she recommended this place  I was going to go with her but as she does not eat gluten I decided to go by myself so she wouldn’t get jealous. Surprisingly this place is on the edge of China Town but a great local for me

Wow the chicken was awesome. Beautifully cooked inside with a nice crisp skin. It is seasoned nicely and not overpowering in flavour. I could eat a whole chicken of this. The waffles on the other hand were below average for me. The stewed strawberries were very nice and I liked the cinnamon butter, but the waffles were to dense for me and over cooked. They were slightly like cutting through cardboard. 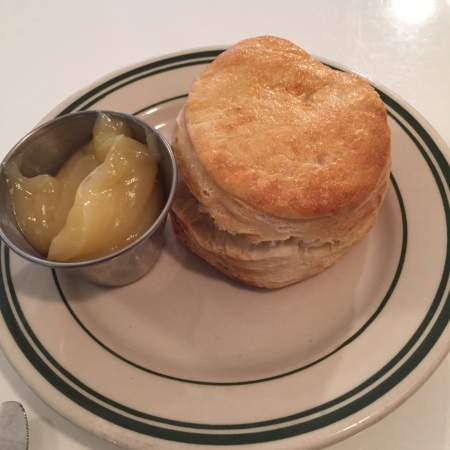 I love American biscuits and they taste really good here. Nicely seasoned, not overly flaky and a good size. They also come with a jam, which I think is apple and it was just so good.

Overall this place is good. When I come back (as I will come back one day). I will have the fried chicken with biscuits. This place is awesome. Also got a sugar and cinnamon donut for takeaway. It was so good, fluffy, light and non oily. Yummy!

One thought on “Pies’n’Thighs – New York”