Wanted to try this place and convinced “Papa Bear” to take me by dropping little hints to him. This place won a Michelin star and is rather famous. We went to the one near Olympic MTR station (which was recommended) and was there before 10am and there was a line forming at 9.50 of locals which was a good sign. The menu is not very big comprehensive compared to NZ standards as there were only 28 dishes including rice dishes and congee.

Very nice and fresh and with good amount of prawn that were in big pieces. The skin was thin and cooked  well to a near translucent color. The flavoring was really nice and there was no need for chili as you just wanted to taste the freshness. 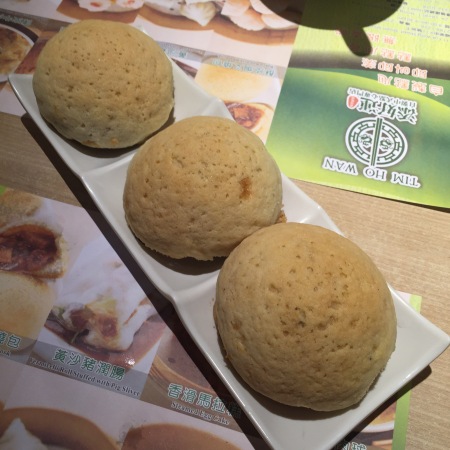 Well these were good and the best bbq bun I have had. The topping was nice, crisp and slightly crumbly. While the inside was thick with lots of bbq pork pieces. Putting it all together makes a great yum cha dish.

Very silky skin and very nice texture. The prawn is the boss in this dish and with soy sauce this is a great dish. So simple but so good.

I have never had this at yum cha before. It is rather a simple dish. The chicken and Chinese Sausage is streamed with a good amount of ginger with the chicken. You are meant to add soy sauce to this dish and it makes it very tasteful simple dish.

Good flavour to this dish with Chicken, mushrooms, and slices of pork wrapped in rice, then wrapped and cooked in lotus leaves. A good dish and nicely cooked.

Another nice dish but what I really liked about this was you can taste the turnip compared to versions we have in Nz where it just has lots off flour mixed into it to substitute for the turnip. Has a small amount of pork and dried shrimp in it, but you didn’t need much more. Interesting though that it came with its on chili sauce.

The skin was not as chewy as the versions in Nz and the filling was cut into long thin pieces. Overall had a good flavour however the sauce was a bit too think in consistency for me and had too much power in the flavoring.

My grandmother use to make this for me and I loved eating it. This reminded me of my childhood but this may of been better than I remind it to be. It was light and spongy and has a nice caramel malty flavour to it. I really nice way to end the meal.

Overall a great Yum Cha experience. The food is fresh as you have to order the food verses it coming around in a trolley. I really like the Har gao and the steamed egg cake.  The service was good but an interesting thing is you have to pay in cash and there is no toilet in the Restuarant you have to go outside and walk into the mall.