After watching a show Pepper Potts wanted something sweet to eat. We looked at going to the Library but she wanted something else, so she decided that we go to Sweet Mother’s Kitchen. Even though it is a local for most Wellingtonians, I have not been here for a very long time. The night we went was very busy and we were very lucky to get a table straight away but we had to share with someone. 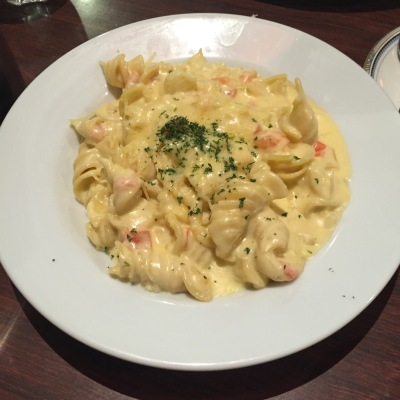 Even though we were here to have a slice of pie. Pepper Potts can never say no to “The Moose”, she wasn’t going to order though until I agreed that I would eat half of it. I would say this is the best mac and cheese in Wellington. The dish is made of gruyere cheese and has a hint of truffle oil. The dish also has small chunks of tomatoes. Even though I so think it is the best mac and cheese in Wellington. Every time I have had the dish it lacks salt but you can always add some yourself once it comes to the table.

This is my go to dessert at Sweet Mother’s Kitchen. I usually order it heated and with ice-cream. However, I only got cream and could not be bothered asking where the ice-cream was. The Apple pie is seems like it is made from fresh apples and loaded with cinnamon. The pastry is really nice and has a slight flakiness to it.  A nice dessert to eat on a cold evening.

Overall I like going to Sweet Mother’s Kitchen, but I only go for a lunch, snack or for dessert. I do not go there for dinner as I do not like what they have on their main menu. Their po’boys are good but that is really all that I eat. However, service is good and I like their offerings on their small beginning menus. Even though Sweet Mother’s has been open for a long time it still serves good food and is reliable.