Another night another place to go to. A friend that I have not seen for a while tagged a long for the experience. I suggested plum and they were looking forward to trying it out, as they knew they served a good brunch and was popular. 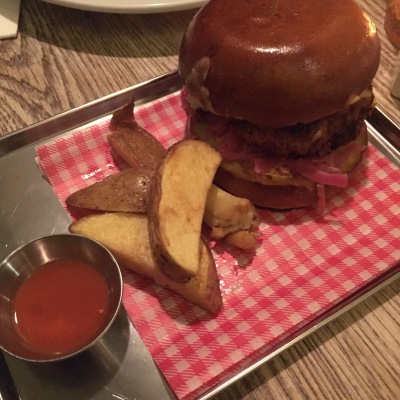 I was looking froward to this burger, as it sounded nice on paper, I love my fried chicken and it was on the cheaper side compared to other burgers in the competition. When it arrived it was a very basic layout. A good amount of fries and a healthy helping of sauce. The chips were good but not fantastic. Some were cooked and some weren’t. I forgot what the sauce was and dip in a chip and got a reminder that it was hot sauce. The chicken was alright, they used breast meat and was slightly on the dry side.Th bacon was nice as was the smoked cheddar, slaw and house-made mayonnaise.

My friend had the festival dinner and went for two dishes. Although they thought it was nice, they were still hungry after the lambs neck as it was mostly bone and not meat.

Overall the burger was average. Competition worthy? Absolutely not. It was just ordinary and the hot sauce needed to be in the burger not outside the burger. Also the service was pretty bad, the owner/maitre’d was not happy that we only spent $60, but the food or service was not worthy to spending any more on dessert or drinks.