A group of friends decided to go to Apache as they won the Burger challenge/competition for Wellington on a Plate this year. I had already been to Apache during the festival. However, I originally went for the Festival menu instead of the Burger. When I originally went, the friends that I went with thought the burger was really good. To be honest I was surprised they had won, so I was very eager to try it.

Apache has espeically bought the burger back after they have won so people who missed out could still try it.

I had tried this before as it was on the mixed platter on the Festival menu as an entree. It was exactly the same as the previous time (and both times without peanuts), I like there fried chicken and great to see that it is consistent. However, this time there was a dipping sauce, which went really well with the chicken and gave it a really good kick. 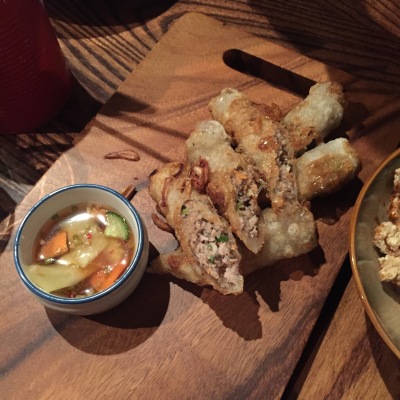 I really liked this dish. I thought there fried rolls were nicely cooked and the filling of pork, vermicelli, mushrooms, and coriander fitted very nicely together. The sweet sour sauce was really nice especially with the pickled vegetables in the dipping sauce.

Firstly I ate the camera bim bim, I thought these were very nice and added a nice sweetness. It also went very nicely with the mayo, which I think was the same sriracha mayo in the fried chicken. Overall I was very impressed with the burger after eating it, but took me a while to appreciate what I was eating as there were so many flavours. The bun was very nice and soft and had a nice sweetness with the chilli, lime and coconut mayo spread on the bun. The chicken was beautifully cooked and so tender with really nice flavours. The addition of mango, tomato were great but I really liked the coriander and mint in the burger.

I decided to have a coffee instead of a cold drink. Vietnamese coffee is a drip coffee with condense milk at the bottom. I was surprised to see how little ground coffee was in the drip filter. The taste of the coffee was very nice and more like a dessert coffee due to the condense milk. Overall a nice treat and a drink I do not have very regularly.

Overall I really enjoyed myself at Apache. It was better than my first time their during Wellington on a Plate as it seems a lot less busy. The service was very good and the food came out relatively fast. The burger was very nice and I could have had another one without even thinking about it.