Update: This place has recently changed it’s name to Soul Shack but same owner and cook from Hot Wafle

I discovered this place through Social Media. Originally this place just made waffles and recently in the past six months they started adding American style savoury food. The difficult thing about this place is trying to get there, when it is only open on weekdays and during the day. So I was on a break from work and I decided to make an effort to try this place.

I was given these to try, which I thought was a real bonus. The hush puppies are made from corn and slightly similar to corn bread. They were deep fried and had some greens in there, which I think was spring onion. They were very nice and adding the barbecue sauce really made these very tasty as it was tangy and sweet at the same time.

I love my fried chicken and when you add waffles, it is a real Southern American dish. The fried chicken is cooked beautifully and the coating that is on the chicken is just fantastic. The Buffalo blue sauce, is hot sauce, which makes the fired chicken taste like buffalo wings and then the blue cheese sauce which is usually the ranch dressing you get on the side of buffalo wings in the USA is fantastic. The Blue sauce is made on site and has chunks of blue cheese in the sauce. The waffle is was fresh and spongy and adding everything together was just a perfect combination. Also on the side was maple syrup, which was great on the waffle. The coleslaw on the side was nice but nothing to write home about it. 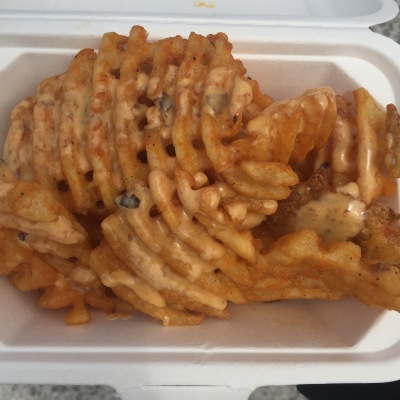 They were good but not fantastic. The chilli cheese sauce that was put on top of my fries was really nice, but I do not think the oil was hot enough for my fries to be crisp as they were slightly soggy.

Overall this place is great. The shame is that it was really limited opening hours and is in Porirua. Also it is in a kiosk, so if it is raining it is not great. The price of the food is a deal when compared to “Wellington prices”. I really do rate this place and will definitely go back and make an effort to do so. Also great yarn with the owner/cook.