I originally went here a few months ago and never posted anything and as I only went for morning tea. I saved the post and thought I would try and go back so I could add a few things. However, the difficultly is that it is only open in the weekdays and I have trouble getting into town unless I am on break. I found out about this cafe as they were involved in the Wellington on a Plate; Donut Pop-up and as I could not get to the Donut stall at Moore Wilsons I decided to go to the source instead. They are a relatively new cafe and serve a lot of variety in they cabinets with salads, pies, sandwiches and different sweets.

As soon as I saw this I had to have it.I got it takeaway as I wanted to have my lunch in the sun. The pastry was rally nice, flaky pastry on the top and more of a crusty pasty on the bottom. The flavours of the filing was really nice especially with the blue cheese. However, the cut of steak was dry and seemed as if the gravy was added after the steak was cooked. The main problem with this pie, was how difficult it was to eat with your hands. The pastry did not keep it’s shape and as the filling was quite heavy it fell apart as soon as you took your third bite.

I honestly was only going to have a pie for lunch, but when I saw this, it was another must try. The donut was nice and moist and you could tell was freshly made that day. The dough was really nice and not too much cinnamon and sugar dusted on top. The creme in the middle was great, with blueberries mixed with the creme. Overall a very nice donut. 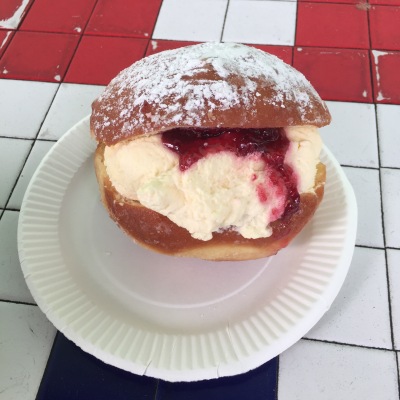 The Classic New Zealand donut. You walk into any New Zealand bakery and one will be there. This donut is slightly more difficult to eat than the usual long cream donut. However, that should not stop you. It is loaded with cream with a good amount of really nice jam. The Donut dough is quite substantial and is a very filling donut and well worth the price tag.

I think this is what they called this donut as I forgot to take a mental note of what the donut was. Inside the donut was a cream with cooked apple pieces. Overall very nice.

I can see why this place is popular with the weekday lunch crowd. It has something for everyone. I wish it was open on Saturdays so I could go there more often. The salads look really appetising and the only thing I do wonder is what is there coffee like. So I will have to go back and try their other offerings.

One thought on “Sixes and Sevens – Wellington”