I managed to bump into a friend who was about to go on their lunch break. They asked what I was doing and I said nothing, so they asked if I wanted to join, which I accepted. They said that they were going to have the chicken salad at Mishmosh. I was slightly surprised as I would have never thought Mishmosh would make a salad. Also I had never eaten or actually been into Mishmosh, so I thought why not give it a go. 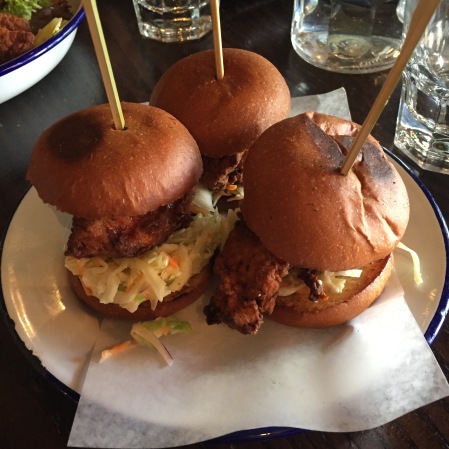 I decided to go for the sliders as I was not all that hungry and thought I would try their Buttermilk fried chicken. For $10, I was surprised to see what I got. I knew there were going to be three of them, but I thought it was good value. The buns on the sliders were grilled and the chicken was nicely cooked and seasoned. The coleslaw was a good addition with some extra mayo. Overall three good sliders.

My friends salad also looked really good with a good size salad with some avocado and a good amount of chicken. 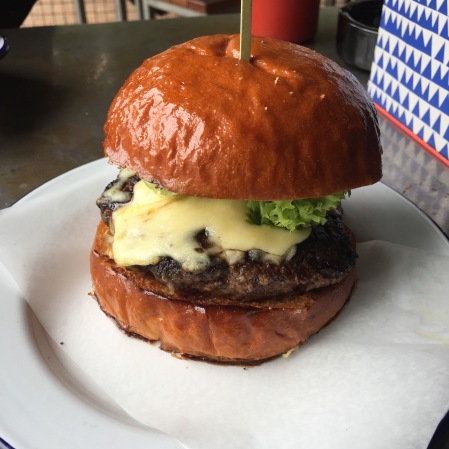 So I went back a week later with my friend that works in Courtenay Place for lunch. I decided to try their burger and see what the small hype was all about. For $10 the burger looked pretty good. The patty you could tell was house made and there was a good amount of cheese on the patty. Overall the burger was OK. The bun seemed slightly dry but grilled on the inside and did slightly break apart. The patty was alright, it had no real seasoning on it and was pretty bland. The chilli jam was a huge disappointment as there was no real kick to it. The bonus was there was fresh lettuce. Basically as I said before an OK burger. 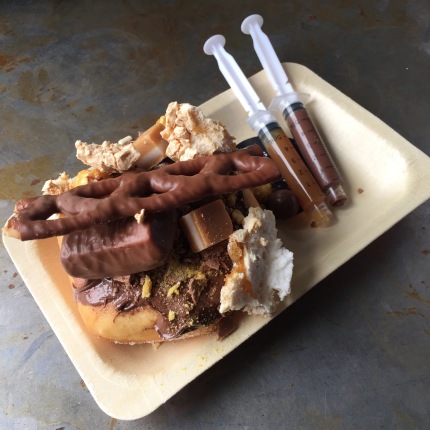 So images of these have been floating around on the web and since I was going back for lunch I thought I would order one. Even though pictures of these donuts look really appetising. Seeing it in person and trying to eat it is very hard and over the top. The donut had cinnamon and sugar all over it and then had nutella spread on top. Then on top of that there were some pieces of meringue, half a curly curly bar, swiss caramels, caramel popcorn, maltesers, and a small pinky chocolate bar. Then on the side were syringes of chocolate and caramel sauce. The donut was still warm when it arrived and I had to eat it with a knife and fork. Overall the donut was really good but I could not eat all of it. I was on a sugar high for the rest of the day.

Overall I was really surprised to see the food offering at Mishmosh bar and it seems to be getting popular with locals that work in the area. With the kitchen selling pizzas, burgers, fries and Milkshakes. I think Mishmosh have surprisingly got it right when it comes to eating especially because the food is quite cheap with burgers, salads and pizzas all at $10 for lunch.