Through Facebook I discovered that Moore Wilson got two new bussiness to fill up their Pop-up Pods for the fortnight beginning Wellington Anniversary day. In the blurb, I discovered that they are the next venture from the owners of DragonFly and that they were serving filled Bao buns and this is what interested me. However to be honest, I am not a fan of DragonFly. Their food is over priced and not that great. I would prefer to go to a more authentic Chinese / Asian restaurant. I think it is crazy an eatery feels they can charge more if they put the word “fusion” into their About me story. But I do like Bao sandwiches, and I am surprised that there are not any stand alone places that serve these as they are quite big in other cities outside of New Zealand. 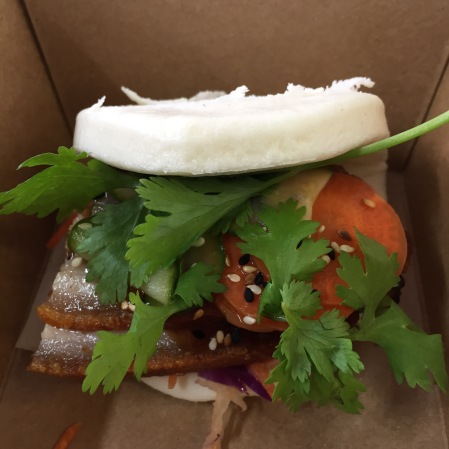 These filled bao buns look very appetising when you receive them and you just want to dig in. Firstly the roast pork is really nice and the crackling is crisp and crunches when you bite into it. I do like the addition of the carrot, tomato and cucumber as it does not make the sandwich so stodgy. The bao is nicely cooked and was nice and light, but overall I did find these bao quite salty and that there was too much oyster sauce in it. 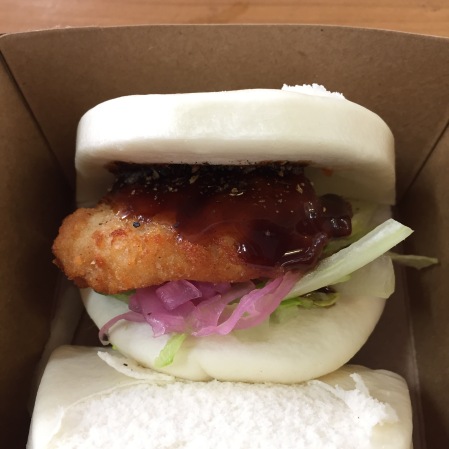 Again a nicely presented bao. The chicken was really nicely cooked and the coating was crisp and seemed freshly cooked. I liked the lettuce, but would of liked more because I felt it was slightly too salty. I did like the raw onion aspect but I did not like what I originally thought was the pickled ginger, which actually may of been the pickled onion.

For me, they are alright. The baos were steamed very nicely and had a good springy texture to them. The ingredients overall were very nice but the sauces were just a bit too salty for me. Also I think the pricing is a bit too expensive for what it is worth. I understand you can charge a premium as you are the only one offering this product in Wellington but I feel they are just being too greedy.