My group decided to come here for dinner one night while we were in Raro. I had heard about this place as a friend had visited here while they were on holiday here and they said the meal was good. We potentially had some fussy eaters so this place worked out well. 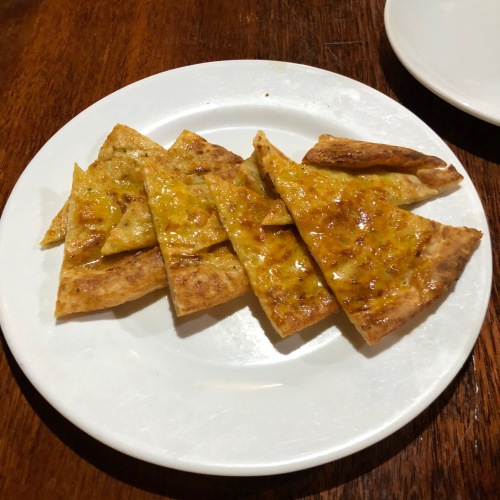 Decided to share this with the table and we decided to go for the plan version not the one with cheese. The base was not like a pizza base at all but more like a naan style bread but cooked in a pizza oven. On the pizza was some garlic butter. Overall this was really nice with a nice crisp crust but a nice soft inside and nice seasoning. 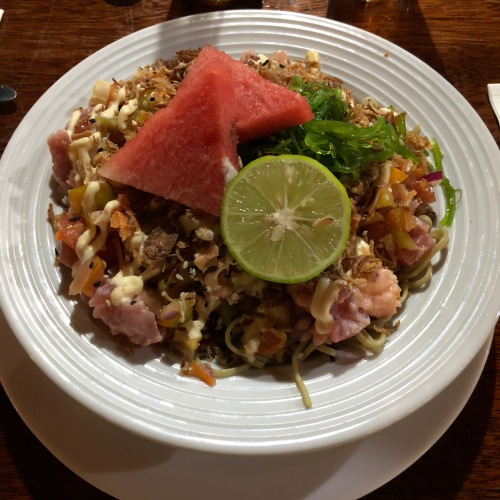 I couldn’t decide if I wanted noodle or rice. I asked the waitress and she suggested that I could go half on half on each side. The bowl was rather large and had half a lime that I squirted over my dish. In the Poke was also some finely cut carrot and cucumbers. Overall this was a great dish. I really loved the fresh raw fish with the vegetable salad and loved the crunch from the crispy shallots. The Japanese mayonnaise was great and I especially loved the seaweed salad that was also placed on top. I lovely dish.

So this is off the secret menu. I was not very sure about this pizza when a local told me about this pizza. It is the same base as the pizza bread which is thinner and denser. On the pizza, there was raw cabbage, a generous amount of fresh slices of raw yellowfin tuna, and a white sauce of coconut cream. It just didn’t look quite right but when I tried it, I was totally blown away. What a beautiful dish of fusion Cook Island cuisine and Italian.

This is also on their secret menu and tasted like a burger. Pieces of beef, gherkins, cheese, mustard, mayonnaise and a tomato base. The base was more the American thick base pizza. Was interesting but not as good as their others.

This wasn’t too bad. Good amounts of chicken, red peppers coriander, and sweet chilli sauce. Sound good but there were better pizzas.

Meat, Meat and More Meat with a BBQ Swirl

This was a crazy pizza. Jam-packed with meat and big chunks of it with a generous amount of barbecue sauce. Overall this was a good pizza.

I am not of those people that think pineapple should not be placed on a pizza. However, the Hawaiian Pizza here was good, with chunks of ham and a good ratio of ham to pineapple. 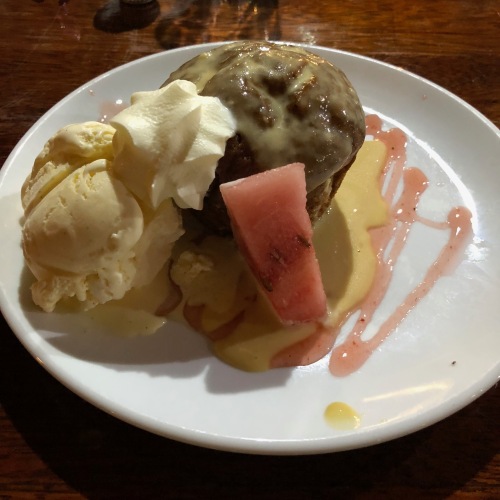 To be honest, this is not what I expected. The pudding was not very warm and the sauce was not warm like other stick puddings. Also, with it was some strawberry sauce placed on the plate with the caramel sauce. Overall, was an alright dessert but not fantastic.

This place is very popular with tourists as there is a mixture of cook island cuisine but mostly European / American style food. The scenery out the windows are beautiful and if you can sit on the deck you are in for a treat. The service is really good and you do feel well looked after. Overall a good place to eat.