Did some research about what coffee offerings Rarotonga offered and the only place that came up was this week place. It has rather short hours in morning and is slightly difficult to find as it is actually in the roasters private property. The toaster is an expat Kiwi and has lived in Raro for 30+ years and started roasting because no one else did it in Raro and the coffee that was being imported was not great. He sources his beans from the typical places and although Raro does grow its own beans no one looks after them and the altitude is too low. 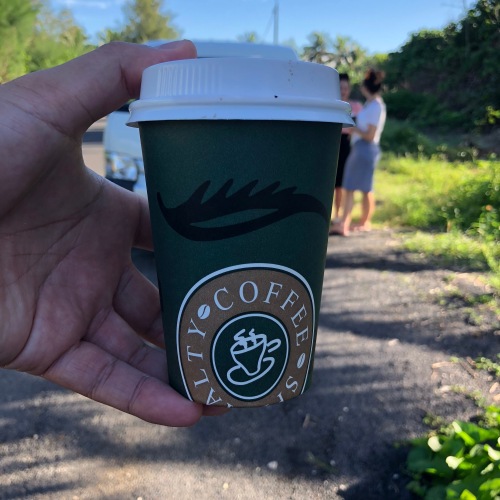 I was slightly annoyed that he gave it to me in a large 12oz cup because I feel when I drink a large flat white it is actually a latte as the ratio of milk to coffee is different. However, this was not the case here. The coffee was really nice and actually had a really good dark kick to it. The milk was good (powdered milk) and was good in this coffee.

Overall. I was pleasantly surprised and wonder what other people think of the coffee as they may think it is too strong as my friend did. But it is rated quite highly on social media but you won’t just bump into the place and have a coffee as it is on the outskirts of Muri Beach / Matavera District. Also, it is not the easiest to find, you just need to look out for a yellow road cone on the reef side of the road.