The bus driver that took us from New York to Washington DC suggested that we try the cafe in the National Museum of the American Indian. She said that although the food is slightly pricey it is good and different to other food that you can get in the area. So we decided to give this a try with the students. There is a variety of different food items from different American Indian cuisine. Surprisingly the students were keen to give it a try and they had ample of seats to deal with at least 200 people dining at one time. 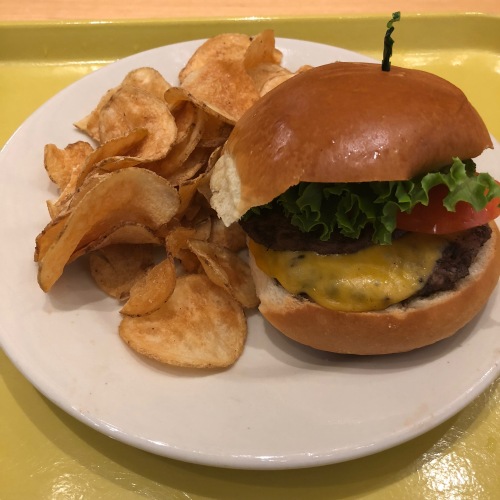 This was a good burger but slightly dry and that was down to the burger bun and the lack of a sauce in the burger. The bison was really nice. It was quite meaty and dense but had a nice flavour to it. The fresh lettuce and tomato was a bonus and I loved the cheese on the second patty. I did add tomato ketchup halfway through eating the burger and made it a good burger to a very good burger. The chips looked like they were made onsite. They were warm and not too thin and have a nice seasoning to them.

I also tried their fry bread and it was very different from Maori fried bread. It is a combination of Maori fried bread to pita bread. In the cooking process, it turned into a pillow and the bread had a nice crunch to it. Very flavoursome.

Overall, this is a great place to try Native American food. They also had some kind of stew with fried banana and meat. Which did lack salt but was really nice. The food is served really fast like a canteen but so many people go through the doors and eat there. Locals say it is one of the better places to eat in the National Mall and when looking at some of the other offerings in the different museums I would agree,