Frenchie is a newly opened Restaurant bought to you by the people or Ortega Fish Shack & Bar. It has taken over the premises of Slim Davies that closed in December last year. Pepper Potts and I went on their second night of opening to give this place a try. They have a set menu for $59 with a select of appetisers, a choice of four mains and desserts. There are also sides that you can order and fresh oysters.

This was a really nice beginning to the meal service. We got an artichoke soup, which was really nice and had a nice intense flavour to it. Also, there were bits of either fried garlic or artichoke and it added a nice depth to the dish. 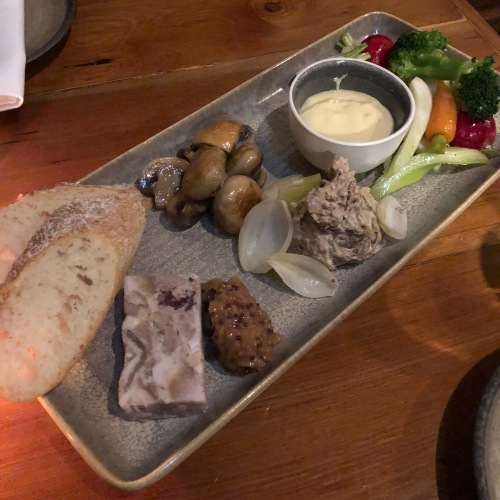 The Smoked Brisket Remoulade was really good and packed some really nice flavour. There was also capers inside the pulled apart brisket and the remoulade bought it all together really nicely. It also went really well with the bread.

The mushrooms were also really nice with a slight tastiness and a nice savoury flavour from the beer.

The terrine was also really good and had nice subtle flavours. It was nice with a quince mustard which was really different.

This was a nicely plated dish and I was excited to see the beef cooked to rare. The greens were nicely seasoned with a bit of oil and although it was mainly for show, the greens added a nice flavour to the dish. The beef was beautifully cooked and I loved the shallot butter that was melting on the beef. The swede fondant was really nice and sweet and added another layer to the dish and the jus just bought everything together.

We also ordered a side of fries. I thought that maybe they made their own but they were just shoestring fries. They were slightly overseasoned but the aioli with the fries was nice but better with the jus from the beef. 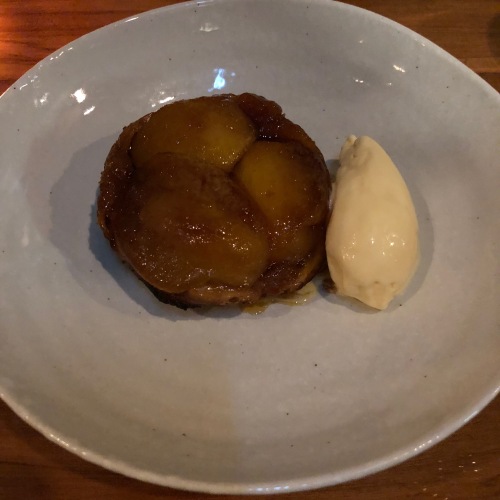 This was a great Apple Tarte Tatin. I loved how it was apple halves and the pastry was really nice. The caramel was great but sweet. However, when you added the Chevre Ice cream which was quite rich and creamy, everything balanced out really well.

I really enjoyed the dining experience here. The service was really good and the food was excellent. For the money you pay, I thought it was really good. It is not cheap but it is not excessive for a three-course meal and I wouldn’t complain. One thing I do find weird, that Pepper Potts mentioned.  The staff are dressed in red and white striped top. However, when you mix the decor and then the uniform of the staff. They actually look like pirates, not French waiters.