Decided to go back to R & S Satay Noodle House as there have been some interesting posts about this place quite recently. I think the food is good but there is just too many options and never know what is really good, but with a bit of assistance, I started to taste some of the different dishes. 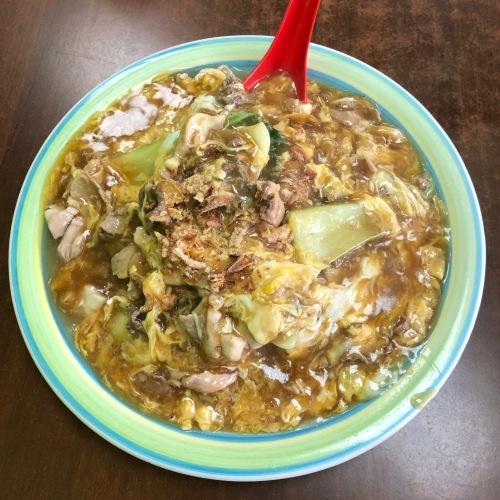 This was a massive dish and I didn’t know what I was getting myself into. This looked very similar to a wat dan hor but has addition egg noodles to it as well. I also added their chilli sauce to it, which was really nice. I loved the fresh pieces of bok choy to it and how it was still crisp and not overcooked. The sauce was really nice and had a nice amount of egg mixture into it. The chicken was nicely cooked and I liked the pork, but I wouldn’t cry if the beef was not in there. The mix of rice noodles and egg noodles was fantastic and I loved the amount of garlic they cooked the noodles in. Overall the dish was fantastic and I really loved this dish.

Had this dish on a coldish night and I thought it would be good to have some soup to heat me up. I am not quite sure what I expected from this dish. However, when it arrived I was surprised by the amount of chicken, pork mince and beef on top of the noodles. The soup was really interesting and not what I expected. I kind of thought the soup would be a basic Chinese won ton soup but it packed quite a punch in the flavour front and was on the verge of being on the salty side. However, you need it with the rice noodles and bean sprouts and they matched each other well. The chicken, pork mince and the beef were good but nothing special to report about expect the beef did arrive pink. Overall a good dish if you want something to warm you up and that gives a lot of flavours and I do not think it had a lot of MSG in there either.

A Stir-fried Combination of Beef Pork, Fresh Vegetables and Mushrooms on a Bed of Stir-fried Rice Noodles

This is not what I expected. I thought I was going to get stir-fried rice noodles without the gravy and it would be dry. Obviously, I was wrong. I have to say this dish was rather ordinary and really nothing special and rather difficult to eat. I did like vegetables and the rice noodles tasted nice. However, as this was served on a small plate and it was difficult to get to things with a fork where a pair of chopsticks would have been greatly appreciated and easier to eat.

I have a love-hate relationship with this place. The reason that if you managed to get the right dish it is really nice, but if you order another dish it is just ordinary. The menu is just overwhelming for a place that has so many menu items and a lot of them are just ordinary.  So what do you do? I generally go to dishes that people recommend but when I order it, I get the wrong them. This place is just confusing. so why bother going.