Mammy Pancake is one of the best makers of Egg Puffs in Hong Kong apparently. I have never had a good one in New Zealand as they use more of a European Waffle mixture and just don’t taste good. The last good one I have had was in New York China Town just walking pass a random vender. So I was excited to try one from Mammy Pancake, which actually has quite a few outlets in Hong Kong.

I have tried a few flavours as they are just so close to my Hotel and actually really good. They are crisp on the outside and nice and light in the middle with a bit of chew. I ordered an Original flavour and I actually got some banana in it, which I thought was really good and the Chocolate chip is really good too. 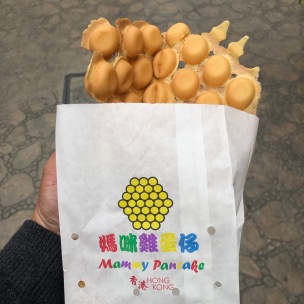 I have also tried one of their drinks which is Mango and Coconut. It was really refreshing and went really well with the egg waffles. Also, they are on Klook, so you can get a cheaper deal if you pre-buy before you go.