Was exploring the new Westfield in Newmarket and discovered that there is an Ippudo Restaurant. It has just recently opened and has had some mixed reviews on Google and Tripadvisor. However, I thought I would give it a try and compare it to the Ippudo I had in Melbourne and also some other ramen places I have had during my travels.

The restaurant is located on the Mezzanine floor of the rooftop dining area of the mall and is nicely set out with a variety of single bar seats and larger tables with some tables also outside. I decided to order the Karaka-Men which is Ippudo’s original tonkatsu broth with thin and wavy noodles, served with pork belly, bean sprouts, spring onions, and topped with special spicy ground pork miso and roasted cashew garnish and also ordered some Popcorn Octopus. 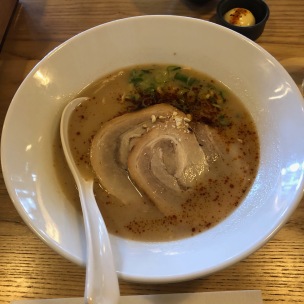 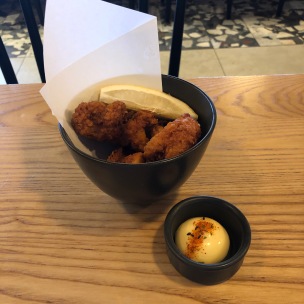 The Popcorn Octopus was really nice and I really loved the crisp coating on the octopus. The lemon added a nice element and I loved the mayonnaise that also came with the dish. I also really liked my bowl of ramen. The spice factor was really nice and I loved the flavours from the ramen. I decided to have my ramen cooked “hard” and I think I really liked it that way as it added a bit of a bite to the ramen. I thought the cashews and pork mince was a good touch and the pork belly was good. I decided to eat my ramen first with hardly any broth as I would order more ramen (as you can do so for an extra $2 if you have enough broth), but I ended up being quite fool. I then had the broth by itself and it was rather salty but with ramen it was good. So next time I will have to have them at the same time.

Overall, a really good bowl of ramen. Yes, a bit on the salty side but was good with the ramen. If you compare this place to the ramen in Wellington, this place is a winner. If you compare it to other places it is up there but not the best I have had.