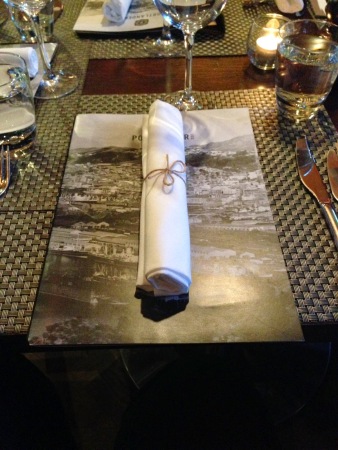 Father’s Day has been and gone and even though my father is not in Wellington, I joined my Aunties, Uncles and cousins with my mother to Portlander.  I have heard a few things about Portlander and heard it was good for it’s steaks.

Before I start to talk about my dinning experience at Portlander, can I firstly say how increasingly hard it is to find a restaurant that is open on a Sunday.  More and more restaurants are not opening on Sunday even for Brunch.  I understand why but it just means there is a smaller amount of restaurants to chose from.

Anyway, my party of nine arrive at Portlander for dinner at 6.  I knew it was going to be an interesting night as my aunties and uncles are fussy chinese eaters and can be quite demanding when it comes to services, e.g. my uncles always orders a long black with warm milk at the end of the meal.  However, he always has to point out that it has to be very hot, but in my experience and talking to different baristas you cannot change the temperature of the coffee that comes out of the espresso machine, and if you burn the milk it is just gross and wrong.  So even though he thinks he is getting a hot long black he is actually just getting a regular long black.

So my party sat down and looked at the extensive menu and it is an extensive menu.  It is actually rather hard to decide what to order, but all the different sections work together.  However, in the order of your dining experience a waiter came over and ordered our drinks.  Even though I don’t drink, I do look at the drink menu, but the drink menu had no non-alcoholic drinks on it, except for alcohol removed wine.  Personally I think this is really irresponsible as a restaurant and what message does it say about NZ’s drinking culture.  I am quite annoyed about this.  Besides that I order a ginger beer, but before that I ask what brand they have and they said Gladestone.  I have never tried this brand so I thought i would give it a try.  I found out it is from Gisborne.  I took a sip and actually could not believe how carbonated it is.  It was really fizzy, but besides that It was quite nice.

Eventually the waiter came back and asked for our order.  I did not end up ordering a entree as I liked the look of the desserts more or even a steak.  I just didn’t feel like one, so I ordered the;

1 kg of slow roasted ribs with our own take on the classic Texan BBQ, served with crispy potato skins and slaw

Two people on my table wanted to order the Winter Duck.  However, was told that they just sold the last one.  This then started some of the side comments from from my family.  However, it was early on a sunday night and they had run out of duck. That was interesting, however, I kept my mouth closed.

My mother ordered the;

The entree’s came and my mother was surprised that there were only three scallops and so were my aunties and uncles and they were also quite surprised how small they were for king scallops.  So some more side comments started flying out of their mouths.

Mains took a while to come and my plate as always comes last, but holy shit.  It was huge.  I was thankful I did not order an entree.  There was plenty of potato skins and plenty of slaw and three big pieces of pork ribs.  As always I ate the potato skins with my cousins attacking them as well and then the slaw.  The skins were really nice and tasty, well cooked and soft.  There was no crunch, but I suppose potato skins are meant to be like that. The slaw was alright, a bit too sweet for my liking and surprisingly no vinegar taste to it.    The ribs were nicely cooked with a great bbq tangy sauce to them  They were perfectly cooked and the meat just peeled off the bone. 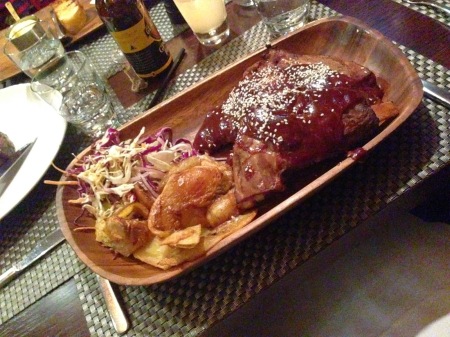 I did try my mother’s eye fillet.  She did complain that it did not have the right taste to it and chinese people have a word for it.  I had to agree it lacked that beef taste to it.  It is very hard to explain but it just didn’t taste right.

This dessert was really good.  The ice-cream was outstanding and the chocolate sauce taste really nice, but the sauce was not hot it was just room temp.  I didn’t know what to really do with the sauce as it came in a little ramekin. If it was hot or slightly warmer than warm, I would of poured it on my cake but it was just a bit weird that it was room temp.  The cake, I felt was slightly over cooked and lacked moisture and that was where the hot or warmer chocolate sauce would have actually worked.  However, because it was just at room temp it did nothing to the cake.  Also a bit more salted caramel would of enhanced the cake further  as it was really hard to taste it.  Everything tasted good and I even used my finger to scoop out the leftover chocolate sauce, but I felt the execution lacked. 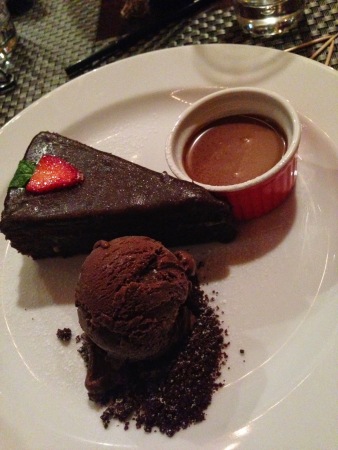 Overall I was disappointed with my dinning experience at Portlander and so was my party, I do not think I will be going back anytime soon.  Also as a bit of a side note, what is really disturbing at the restaurant is the head chef shouting out the orders at the pass.  Really not cool and does kill the dinning experience.