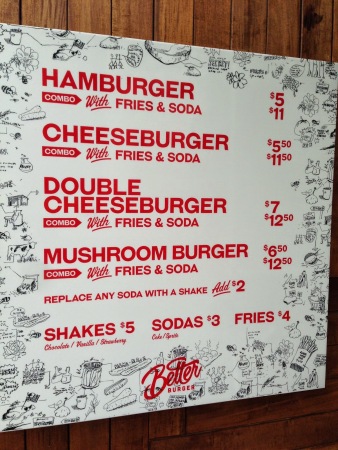 During the day I checked my twitter and feed and saw that Metro Magazine had just released their Auckland Cheap Eats for 2014.  I was stocked.  Now I had a guild to see what else Auckland had to offer.

So since i did not have Wendy’s for Lunch I decided to try Better Burgersin Britomart, which were on the Cheap eat list.  I did scout the place earlier in the day and there was a line but on a Friday night there was not a line but it was busy, so busy i decided to order takeaway as I did not want to look like a loser eating food y themselves in a hipster like joint.  So I ordered the Cheeseburger combo and just like McDonalds for a dollar extra you can upsize your combo.  So I upsized as I was pretty hungry.  Did not take long for my food to be ready.  Once I found somewhere to eat my food, I looked at the burger and the first things you notice is; how small it is, but how fresh it looks with the lettuce and tomato.  The taste of the burger was really good.  The bun was toasted, onions were cooked nicely and the cheese melted over the meat, yum.  The patty was a bit too over cooked for my liking.  I do like a pinkish patty now.  Overall with the fresh lettuce and tomato the burger was really good.  However, not as good as a Rockwell and Sons burger (see previous post) or Huxtaburgers in Melbourne.  But for NZ standard I thought it was really good and cheap, but I suppose the price you pay is the size of the burger you get.  The chips, were really good.  Skins on and looked handcut (isn).  They were crisp but slightly too much salt, which was a really shame.  As they were good chips. 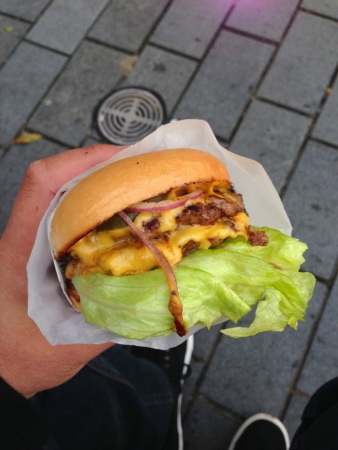