So apparently this place is very famous and my cousins heard that I liked fried chicken so they took me to one of the restaurants. After some research I find out that it was not southern fried chicken but it was a double fried Korean chicken with two varieties either normal or spicy.

We arrived and as we were waiting for my cousins the other members of my party were hungry so we ordered some zucchini fries for an appetizer to share.

The fries had a crispy batter to them which was bread crumbed and also had some Parmesan cheese on top. Also came with two condiments of spicy mayo and tomato sauce/ketchup. I thought it would be a healthy version to french fries but I was wrong. They tasted nice but I wouldn’t really order it again. 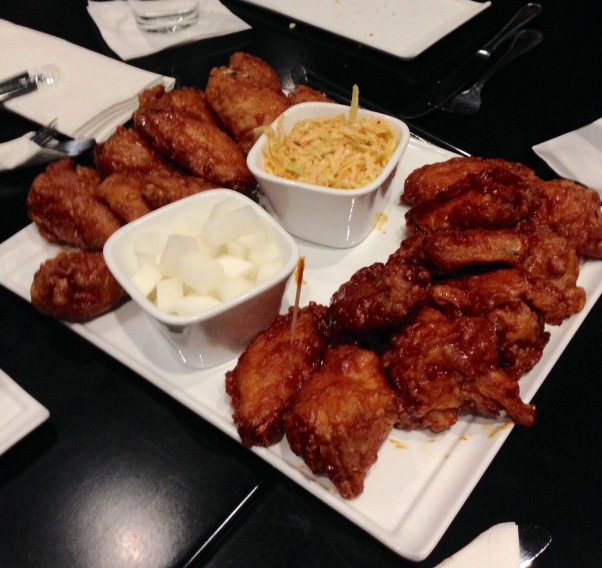 So the last member of the party arrived and we then ordered the chicken. We ordered the total of forty wings between the four of us. We ordered twenty normal wings and twenty spicy wings. We also got two free sides which were pickled daikon and a kimchi coleslaw. We also but a bonus wing which made as Asians happy.

The side orders were refreshing the daikon was good but nothing special, just pickled daikon. The coleslaw was also refreshing with s bit of spice from the Kimchi.

The Wings
Both were very crispy and had nice succulent cooked meet.
The Spicy was hot and tasted a bit like buffalo wings. It was very nice and had a good crunch.
The normal was more sweet and a lot easier to eat and if I was going to decide which one to eat I would have the normal as they were easier to eat without that chili burn on your lips.

Overall a good experience, one of my cousins say you only come for the fried chicken and you really do not eat anything else. Another cousin said she was slightly disappointed as there was not enough sauce on the wings, which I slightly agreed with, but worth a try.

One thought on “Bonchon – Washington DC”