So I am now in DC and another of my cousins took me to this place. It is know for its southern style food and a lot of famous Americans have gone including Jay-z, T-Pain and Snoop Dog. So I was very excited to try this place out. I ordered the Eight wings dinner that included two sides and my cousin ordered the Fried Whiting with sides of mac and cheese and collard greens. I also ordered a coke and bought to table was this huge cup fuller with ice and two cans of coke (only in America).

The fried chicken wings
Chicken wings real crispy and not over powering. Good flavour and nice texture not over cooked. So good. Also has buffalo side sauce which was nice on the side

Mac and cheese.
So good home made southern style. A lot of cheese and it was stringy. Not over powering. Just made with so much soul.

Rice and gravy
Alright but not the best. Very pain and was a side that I didn’t eat a lot of because I didn’t want to full myself up on something that was alright.

Fried Whiting
Nice fried coating and succulent fish. Overall very nice and better than our fish and chips in Nz. Good spice to the coating.

Collard greens
Not my cup of tea, had a vinegar taste to it and was very leafy.

Cornbread.
Best cornbread ever. Was sweet and taste so good and it was warm. Tried it also a day later and was still very good. 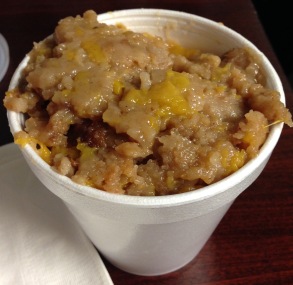 Omg. This is amazing. It is a mix between a bread and butter and an Apple pie. Lots of cinnamon and comfortable. Would of been great with ice cream. I am going to try and make this when I get home.

I was so full after leaving this place but the food was so good and had so much personality. It had that extra homely cooked food style. I would love to come back but I do not know when I will be back in DC.