After having Bruch here a few weeks ago (review here). The same friends that I went to brunch with wanted to come here for dinner. So we decided at the beginning of the week that we would adventure out to visit Cafe Polo.  We had a booking at 6pm on a Saturday night.  I have been here before for dinner, but I was excited to go back.

T one of the members in the group recommended the platter.  This was actually her third time here in three weeks and she said she always orders this, so we ended up ordering two as there were four of us.  The platter is very generous and has a lot of things to try on it.  The mushroom arancini was very nice, the fish slider was beautiful with the fish battered and well cooked, the chicken taco was also beautifully fried and crisp and had a nice slaw with it, the feta was creamy with olives, black currents, beetroot chutney and some finely sliced onion and the freshly baked bread was very nice with freshly churned butter.  The highlight of the platter for me was the freshly made flat bread with the white bean dip, with crispy fried chickpeas on top with some olive oil.  The dip was so smooth.  We also ended up ordering two extra flat breads because we needed it for the left over dip and we did not want to waste it.

I decided to try the fillet for a main, I originally requested it to be rare, but I was advised that they do not serve it rare due to the cut and they would serve it medium rare, which I was OK with.  The fillet arrived and I was impressed with what I saw.  The chips were beautifully cooked, crisp on the outside and fluffy in the middle.  The onion rings were outstanding; crisp, not soggy and nice seasoning in the batter.  The fillet was served with chipotle butter, which was beautiful and had a nice kick to it.  The fillet was perfectly cooked for me and was in-between rare to medium rare.  It was absolutely a fantastic dish.

I also had the opportunity to try my friends Pan roasted fish which was sword fish.  I usually do not comment about other people’s dishes.  However, this was just another great dish.  It was beautifully cooked and well seasoned, but the best thing about the dish was the truffled cauliflower puree.  This was out of the world and so smooth and had some great flavours and when you have it with the fish, Wow! 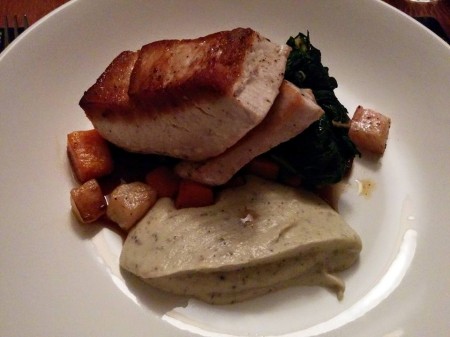 I was tossing up between this dish and the brûlée, but as the last time I ordered a brûlée from another restaurant turned me off, I decided to go for the sandwich.  The presentation of the dish was very good.  However, I did wonder why they called this a fudge sandwich.  On the top was caramelised popcorn with dried raspberry pieces sprinkled on top with some chocolate sauce.  It was a biscuit like sandwich, which was across between a wafer and an Anzac biscuit and inside was ice cream and some caramel sauce.  Also on the side was some raspberry coulis.  This dessert was fantastic, not too sweet and the biscuit did not lose its consistency and stayed crisp.  It was very nice.

Overall this is a great place to eat if you are in the eastern suburbs.  It has great food and great service.  I can see why my friend comes here so often.  I cannot say anything bad about this place.  It is just so good.

One thought on “Cafe Polo – Wellington”