“Phoebe” and “Voltron” have been talking about Halal food to me since I was last here in December, and as”Phoebe” is now on a GE diet they decided to take me to eat hala food. This place is pretty popular and they were originally a food cart but decided to open a little eatery in East Village. 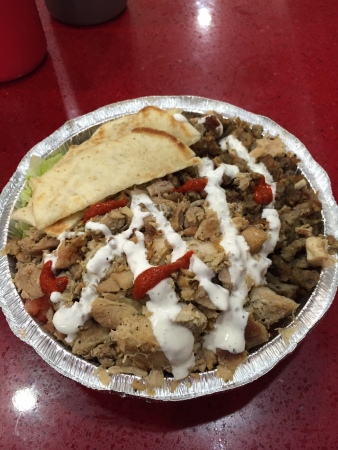 “Voltron” ordered for me as he wanted to give me the full halal experience. In the platter there was; chicken, gyro, rice, pita, lettuce, and tomato. You then have to add you own sauces. I eventually drenched mine in garlic yogurt, which “Phoebe” called “magic sauce” and also added chili sauce which had a very good bite to it. The platter was very nice. The meats were nicely seasoned and when you mix it all together you get a very good all rounded meal. The pita bread was also very nice, warmed and thin not too thick.

I was not that hungry and didn’t end up eating the whole thing even though I wanted to.  It was very nice halal food even though I have not eaten a lot of it. It was all nicely seasoned and fresh.  I feel you have to add the yogurt sauce.  There was also barbeque sauce but for some reason I found that just wrong.

Found out that Tiger also do a dry version of their Malatang. To be honest, I cannot stop thinking about this place as it is so good and I had discovered another reason to go have it. I went with mild in spice and that was a slight mistake. It totally kicked my ass, but I have to say the dry version is not as good. Not as much flavour and actually just pure spice. Stick to the soup version I reckon.
Oh the hot chocolate @scopacubastreet
Big Breakfast @seashorecabaret
Fish burger @freskosupplies and some calamari.
So lucky to get some kaimoana: pāua. Interesting that pāua is not pronounced "pawa" it is more like "toe" but with a "p".
If I have not said this then I will say it now. The mapo tofu at @_kccafe is legit and the best in town. It is just so good.
Chicken and Waffles @orleansnz
Finally got back here to have a fresh fruit ice cream.
OMG!!!!
OMG There is skewer game at the Night Market in Birkenhead on a Sunday.