One of my friends originally from South Africa posted a picture of the food from this place and I was intrigued and I then wanted to try it. “Phoebe” also knew what I was talking about so it must be a good place. There are several outlets to this place and we went too the one on Eat Village. 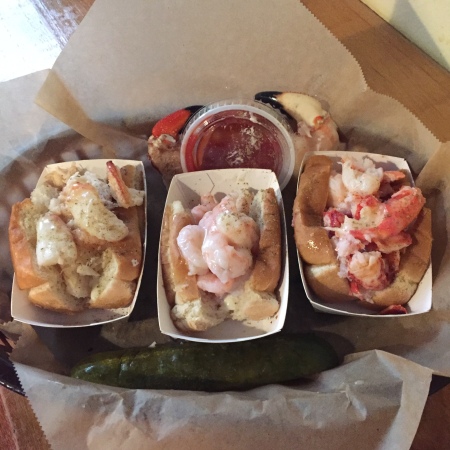 Very nice. Natural flavours with a nice amount of pepper. Shrimp were nice and a nice grilled bun.

Wow. Same is the shrimp, nice and natural.

OMG SO GOOD. Nice and again so good. So natural in flavour and so tasty. My favorite as the flavor from the lobster was more subtle than the others

Claws
Presented very nicely was my least favourite but still good with the dipping sauce.

The mixed platter was so good and fantastic that I could  try the different things on the menu. I also got to try the clam chowder which was very nice and not over powering in flavour. Overall it was very nice place and it was great that lobster is in season. If I come back to NYC I will definitely come back.