Final night in NYC and my cousin’s took me to have American barbeque. Mighty Quinn’s is in the East village and you have to line up for food and order at the counter, where they cut and prepare the food in front of you. I do prefer these places as then you do not have to tip any of the staff. 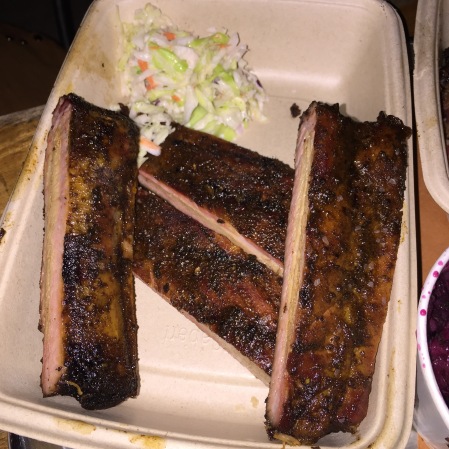 Again nicely flavoured and has a nice barbeque taste to the meat. The meat was relatively tender and was not difficult to take of the bone. We got singled serve for each the ribs and the brisket and had it with their barbeque sauce which was absolutely great and nice.

Nice cut and very tender. Great flavor and basically melts in your mouth. Great b   arbeque taste. Also came with some coleslaw which was nice.

I thought these were meant to be spicy but I did not really get the kick from it. The wings were slightly over cooked for my liking as the meat was not as easy off the bone as the other two meat dishes. It still had a good flavor and nice with the barbeque sauce. It also came with pickled celery which surprised me when I ate it as I thought it was just cooked onion. It was rather sour and had a kick to it.

These were nice and had a good flavor to them. The fries came with burnt ends, Chile-lime sauce, red onions and scallions. It was a good side dish especially as it was fries and covered with the burnt ends and other stuff.

I was surprised from this dish as the beetroot tasted more canned and piled than rotated. It was expecting a more earthy flavor from the salad but got a more vinegar tasted. Was disappointed with this dish.

Overall I liked this place the barbeque was so good and overall the meat was tender and the flavoring was so good especially with their barbeque sauce. A winning place if you want to try American barbeque.