Decided to go back to Monsoon Poon with Pepper Potts”.  Had not been for a while and felt like going to a good old Wellington staple.  You generally know it is going to be good food and good service, but as I had not been for a while, I wondered if anything had changed.  The main thing that has changed is that they have changed the menu.  I was actually shocked when I got seated and started looking at the menu. I think over the past 10 plus years this place has been open it has never really changed it’s menu and low and behold the night I come they changed to a new menu.

This has not really changed from the old menu.  It is cooked very nicely and the squid was freshed.  The crispy panko crumbs were nice, but you could not taste the chilli from the chilli flakes.  The garli mayo with thai basil and mint is very nice and actually rather refreshing.  I nice squid dish. 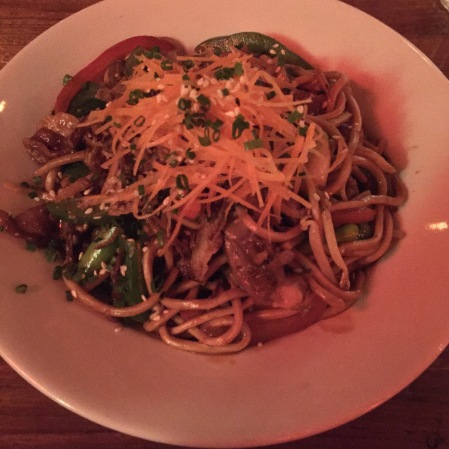 Overall this dish was a good mee goreng.  A smaller serving than you would get from KK Malaysia and Satay Village and about $10 cheaper.  There was a good amount of green and red peppers and not overloaded with bean sprouts which was good.  The duck was nicely seasoned.  However, I did get duck pieces with gristle included.  The flavouring of the dish was nice.  However, it was too salty, especially at the bottom of the dish.  There was no spice to the dish and I had to add sirachi sauce to my dish.

This had the potential to be a very nice dessert.  However, the overloaded the top of the dessert with cane sugar syrup and was far to sweet.  I had to pour it out of my glass onto the saucer.  Once I had did that, it was a lot easier to eat and was very nice and refreshing.  Nice to have mango slices in the jelly, but I think they came from a can instead from a fresh one, which was a shame.

Overall I think Monsoon Poon has lost a bit of patronage and it felt it had to reinvent it’s menu.  However, I have not seen any advertising for the change anywhere. Monsoon Poon is a safe bet for big groups or if you feel like something that caters for people of different tastes.  Also I think the service has changed and not necessarily for the better.  Our main waiter every time he asked us something was also carrying dirty dishes to the kitchen, which I thought was a bit weird.  Overall I think the standard has dropped which is a shame or competition in Wellington has become more fierce.