“Momma Bear” wanted to try Jano after hearing about my experience there. As it was her birthday, I decided to take her even though I had only dined their three weeks ago.  After deciding that we were going to go there, I went online hoping that their menu had changed slightly. It had, however, Jano were also participating in “Gout de France“. Where chefs around the world were celebrating French Gastronomy. Jano was one of only eight restaurants participating in New Zealand and they had created a special five course meal. 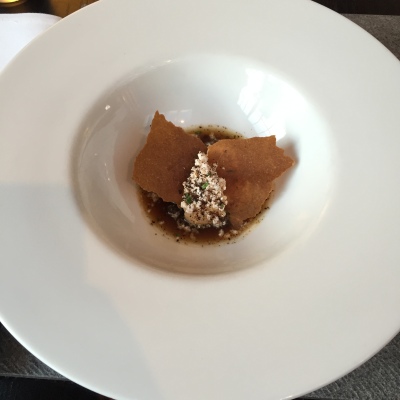 What came to my table was not what I was expecting. However, this was a fantastic twist on Onion Soup. There was a onion soup reduction and then there was caramelised onions with some creamy onion substance on top.  As well there were two wafers and some crispy parmesan sprinkled on top. This was just delicious and I hope they put this on their menu in the future for others to try. 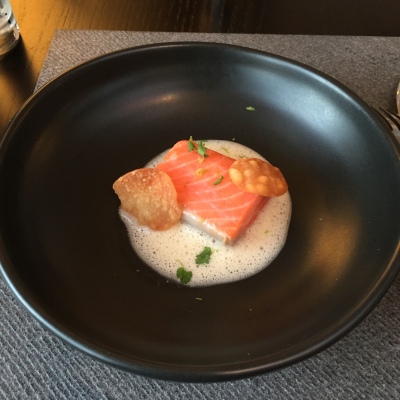 This dish was nicely presented. There was s nice piece of raw salmon and coated in Yuzu juice, which slightly cooked the salmon. There was also some nice crisp pieces of fried bread, some kind  of froth reduction also on the plate and coriander. I was worried that the coriander was going to be too overpowering and for someone that does not like coriander too much. The amount on the salmon was perfect. The salmon and the reduction was beautiful with the slight sourness from the Yuzu. The fried bread was also a great addition,adding a bit of crunch to the dish. 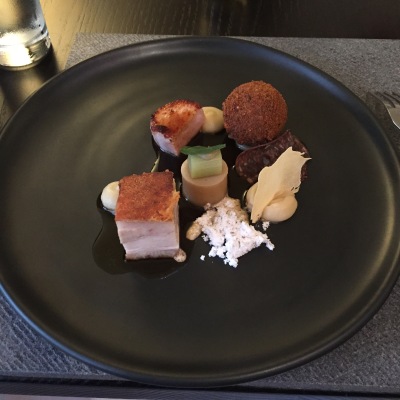 Three different cuts of pork, each beautifully prepared and cooked. There was a sirloin, belly cut and trotters. The sirloin was nicely cooked and with the addition of the parsnip puree, rhubarb jelly and sniper berry powder, it was beautiful.  Also the belly was great with a crispy skin and great with the puree, jelly,and powder. The trotters, were cooked into a ball and coated with some kind of ginger bread. The ball was very nice with a slight hint of ginger and when you add the other stuff again very good. Overall a very well cooked and beautifully presented dish. 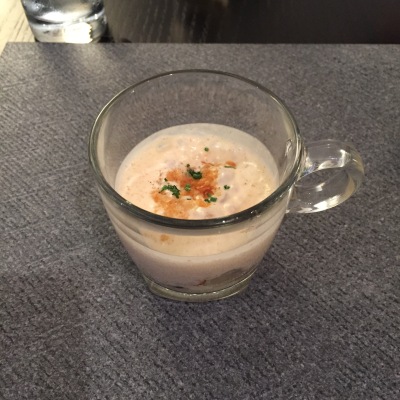 I wanted to try this, when I was here the last time, and I was pleased to see it on the Gout de France menu. I had no inkling to what this was or how it was going to presented and when it came in a clear cup, I was totally surprised. Inside Reblochon cheese, potato, bacon, Onion and truffle oil. We were told just before we ate it to dig the spoon to the bottom. Taking my first spoonful, I was just in awe.  It was just so good and with the addition on truffle oil it was unbelievable. 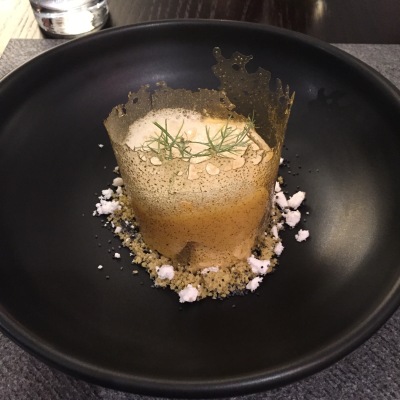 I had this dish the last time.  It is just so good.  Momma Bear could not finish hers, so I ended up finishing it.

Overall again a very good menu.  Top class; delicious food and fantastic service.  I will be going back, maybe not for a while as I will need to save some dough before I go back, but I will definitely go back as I still want to have their degustation menu.