Heard that one of the owners of Maranui, Queen Sally’s Diamond Deli and form owner of Deluxe Cafe was opening a new cafe in Petone in the Petone Rowing Club. I saw an article in the Dom Post and as one half of B1 and B2 wanted to go to Maranui for a catchup I suggested trying Seashore Cabaret. 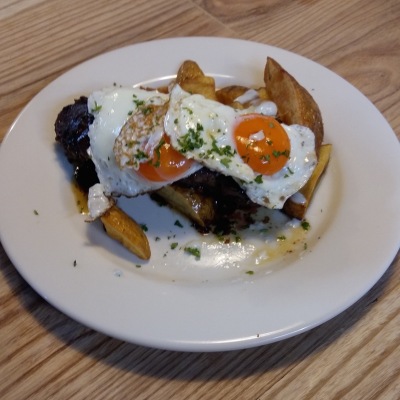 When it arrived I was very impressed with what I saw. It was well plated, with the steak and then chips around the plate, with two fried eggs placed on top.The chips were hand cut and at least fried twice and were nice and crisp. The eggs were cooked nicely with the yolk still runny and was great dipping the chips into the yolk. Even though I was not asked how I like my steak cooked, it was nicely cooked to medium rare. With the steak, I think there was also Rocket Fuel sauce.  Overall a great breakfast. 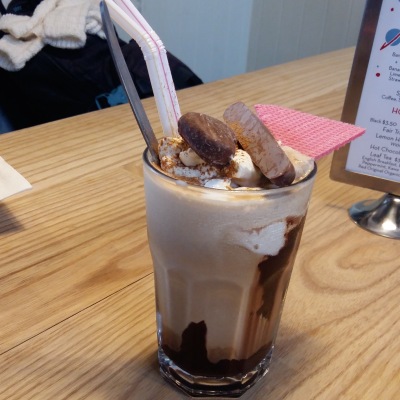 Even though it was not entirely summery weather outside, I decided to try their Iced Mocha. Overall, was good, but slightly a bit too sweet for me.  Wanted more of the bitterness from the coffee to come through.  Had a good amount of ice cream and also came with a chocolate finger and a marshmallow heart.

I really liked Seashore Cabaret.  The interior is nicely designed and vey retro with an American dinner feel to it. They have a deck that I presume would be used on a sunnier day. There is a lot of seating but still feels open with the staff being very intuitive just like their sister cafe Maranui. There are also old school arcades at the back and crazy mirrors near the bathroom that would entertain the kids. We did have to wait half an hour for food, but we knew that when coming in. Also they roast their own coffee, which I think is interesting.  I did not try their coffee, but will do in the future. Overall a great place and comparing it to Maranui, it is pretty much very similar, but it is also open in the evenings. Will be back soon and one half of B1 and B2 said this maybe their new local as Maranui is a bit of a hassle for them to travel to with their baby and a lot closer to where they live.