There has been a lot of hype about Husk through newspapers and magazines and social media. I have finally had the opportunity to go and try it out and see the layout and try their food. The entrance way is pretty cool walking down an old converted driveway and then waking into this open bar slash restaurant. The bar and dining area are at the front half of the premises and at the back are brewing tanks for them to brew their own beers. The menu consists of small plates that you can share or eat on your own. Pepper Potts and I decided to order four small plates and some fries to share.

These sliders were very nice. The fresh was fresh and lightly cooked and seasoned with just salt and pepper. The buns were toasted on the inside with the lettuce being fresh. The red chimichurri salsa went really well in the burger giving a fresh and slight spice kick to the whole thing.

It is great to see a good amount of different items on top of a pizza. There was plenty of fresh tomatoes, basil and melted mozzarella on top of the pizza. Also on top was balsamic vinegar reduction which add a nice taste to the pizza. The one thing that did annoy me, was it was not pre cut and was difficult to actually cut. Also it was hard to eat because some of the items would fall off, but that is a slight trade off for an awesome pizza. 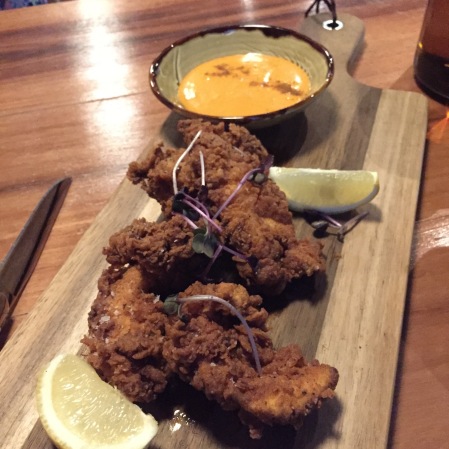 Yes I did order this. Was it a mistake? Totally not. The coating of the chicken was nice and crisp. Was really nicely seasoned and nicely cooked. The harissa aioli was a great compliment to the chicken and added a bit of spice to the chicken. Adding the lemon also to the mix just made this dish really good and I would say one of the best Fried Chicken in Wellington

This was an interesting dish on paper and also while eating it. However, this really worked and was really nice.  The tomato sauce /chutney/ salsa was really good and complimented the spring rolls really nicely.

I ordered these as a bit of a guilty pleasure and to also full the remaining space in our stomachs. Even though the fries were nicely cooked, they did not look hand cut at all, unless someone in the kitchen is very skilled with a knife. The aioli that came with the fries were also very nice but dipping them into the harissa aioli was better.

I am overly impressed with this place. The surroundings, layout and decor are very well presented. The food was fantastic, and I was very impressed with their staff and the knowledge they have of their menu. Husk are not just present themselves as a Bar, Eatery and Brewer. They are also roasting their own coffee beans under Karamu coffee. I will be going back and trying their brunch menu and hopefully also try their coffee.