Found myself back in Auckland CBD and needed to get something to eat after nine at night. I have been to Mamak before but not for a very long time and since telling Pepper Pott’s brother (who now lives in Auckland) about this place. He does not stop talking about it. So I thought I would go back and try something that I have not ordered before. 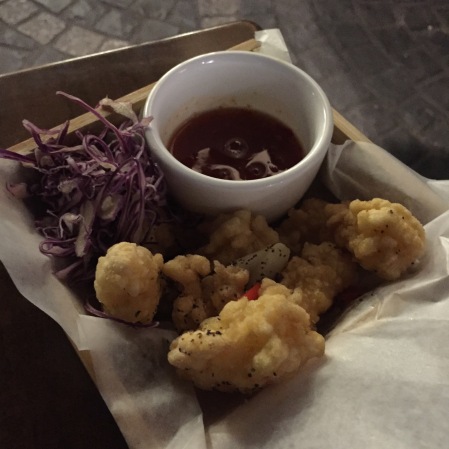 This was really nice. The coating had a good crispness as the oil was new/clean and was nicely seasoned with salt and pepper. The squid seemed fresh and was nice to eat the garnish of shredded red cabbage. Also there was sweet chilli sauce on the side which went well with the squid.

This was different to the ones we get in wellington. They use two types of noodles; egg and rice noodles mixed together. Their was a generous helping of squid and prawns mixed with the noodles. Also there were bean sprouts mixed through and some deep fried wafers tossed on top. Overall was a nice dish but I would of preferred a bit more seasoning. However, the addition of sambal on the side was a real bonus.

Overall I can see why Mamak keeps getting placed on Aucklands Cheap Eats list. The price is good and the servings are big. The food comes out fast and it is good. If you want a good Malaysia feed in Auckland CBD, this is a good place to go.