For some reason this came up on my Instagram when I was in Welly and since I love my Portuguese tarts I saved their Instagram handle. They have a very popular rating on social media so I thought I would give them a try when I get to Auckland.

I love my coconut and when I saw them I decided to give them a try. On top there is a big amount of coconut which sticks mostly to the bun. The coconut is slightly sweet and when you take a bit with the bun it is a great match. The bun is very similar to a Chinese coconut bun but has less butter. 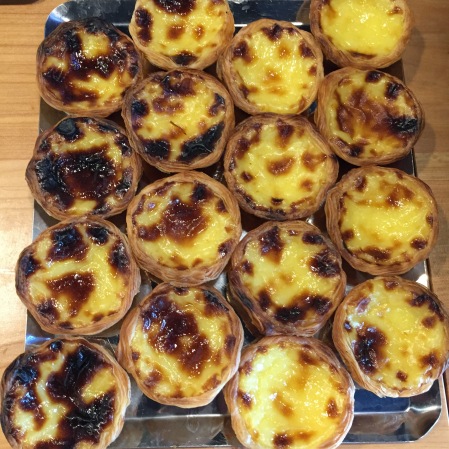 Or better known as a Portuguese custard tart. These tarts are very moorish. They are slightly on the sweet side and do go well with a coffee   The pastry was crisp and had layer upon layer of thin pastry but had a good crunch to it. The Custard was smooth and when you add them together you just want to take another bite and also buy another one. So good!

I don’t know why I ordered a coffee. I knew that it possibly would be crap but i still ordered one. What did worry me was when the person asked me if I wanted cinnamon or chocolate on top of my coffee and that she served it in a 10oz for a regular size. The coffee was just not what I was use to and ended up throwing it out after three mouth fills.

Overall I can see why people have rated this place so highly. The baked goods that I had were really good especially the egg carts. However, the coffee needs to be worked on.