I have seen this place a couple of times when walking past, but have not seen many people inside until after there was a written review of this eatery in the Dom Post. Slowly more people are going in and I thought I would to and give it a try. Just like a typical Chinese restaurant there are many different dishes on the menu.  However, I thought why not try their Laksa first to help my quest to find the best Laksa in Wellington. 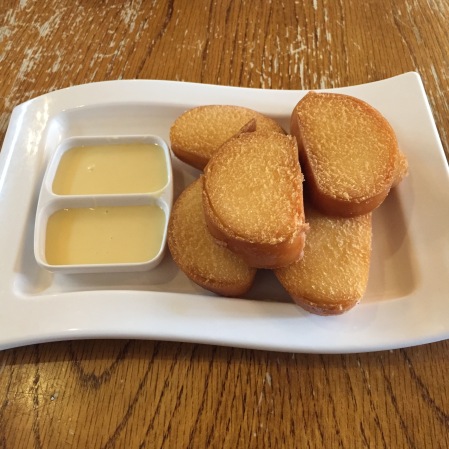 I was very surprised to see this on the menu and also surprising to see this on the entree section not the dessert section. This would be one of Brother Bears favourite dishes and I suppose it has rubbed off on me.  The Mantou is Chinese bun dough but deep fried instead of steamed.  The bread was served hot and crisp and you dip the bread in condensed milk. It is just so good!

This was served in a big bowl and filled with chicken, pork and beef slices. However, the meat was very much served and cooked in a Chinese style where the meat is soaked in corn flour and becomes slightly gluey and very tender. The soup was alright but nothing really to write home about. The boiled egg was nice as was the tofu. The biggest shame was that their were rice noodles and egg noodles. I do like egg noodles in my laksa but not a fan of rice noodles as they really do not have a lot flavour and because the laksa was alright the noodles were bland.

This place is relatively new and slowly more people are trying this place out. The decor is not fantastic, but it is alright. The service is good and you can tell it is run by a family. I will go back and try other things from the menu. The photos they have on Facebook does make the other items on the menu appetising. Also their opening hours are interesting especially because on Friday and Saturday it is open at 11.30am and closes at 3am.