Found myself to be in Melbourne during my latest break from work and as Momma Bear decided to be in Melbourne roughly the same time as I. My first meal in Melbourne was with Brother Bear and his family. Brother Bear suggested this place as it is a good place for his cubs. It is right in the middle of the CBD and had lots of space for people to sit.  I was reading the menu and discovered that this place has quite a few daily specials. Firstly it was a $20 lunch special, then as it was a Sunday, it had a special on some of their beef burgers. On top of that there is their normal a la carte menu. 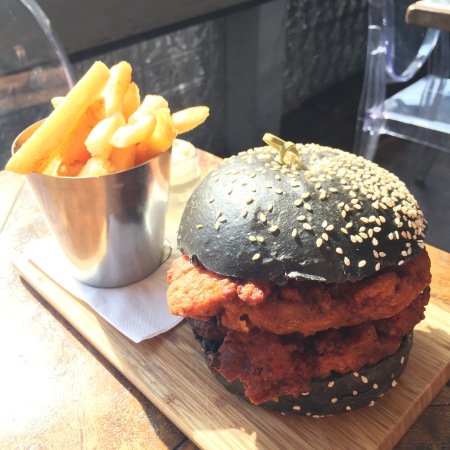 As you may known I am a sucker for fried chicken. I was also deciding if I was going to have the wings but the burger won on the day. With the $20 lunch special the burger also came with fries and a beer, cider, house wine, juice or soft drink. I decide to go for their ginger beer, but they had sold out so I got a ginger ale instead. When the burger arrived I was surprised to see how big the burger was, the colour of the bun and the sizes of each of the chicken pieces.

The chips were really nice and had their “signature” flavouring on the chips, which were slight spicy and give it a bit of a kick. The burger was really nice and had quite a bit of spice to it. The bun was fresh and I think coloured with squid ink. It was not toasted but was very nice. The coleslaw was good and really did not have a kick to it. The fried chicken on the other hand had a real good kick to it and was nicely cooked. Overall the burger was really nice and all the elements were fresh and nicely cooked.

Momma Bear had the Beef, Apple and beetroot burger which she really liked. The cubs liked their kids menu and especially enjoyed the scoop of ice cream at the end, especially because the eldest cub was not going to get any because of his allergy to egg, but the kitchen made him a sorbet which he was so happy about. One thing that did annoy me, they give you a aioli sauce in a small narrow jar, but the chips weren’t long enough to dip your chips. Overall a great place with good service, good food, good atmosphere and great for large groups and kids. A big tick.