Sals Authentic New York Pizza has arrived in Wellington. Apparently it had delayed it’s opening but now it has opened it’s first eatery in Cuba Street. I had tried it when I was in Auckland last month and was interested to see if there was any difference and also to try their wings. Betty Boop joined me on a Friday night and this place was pumping with is needing to wait for a table.

These looked more like the buffalo wings that I have gotten in the US. However, they were rather small in size except for the two drumlets on each end. The server did warn me that these were going to be hot and I was expecting them to be HOT. So I dip my first one in quite a bit of Chunky Blue cheese sauce. Although the sauce was really nice (but not chunky), the wings were not overly that hot. So I tried the second one without sauce and it had a bit of a kick and it did burn, but it was not unpleasantly hot. Overall nice buffalo wings and tasted like the ones you get in the USA. I was just disappointed on the hotness of the wings and how it was oversold. 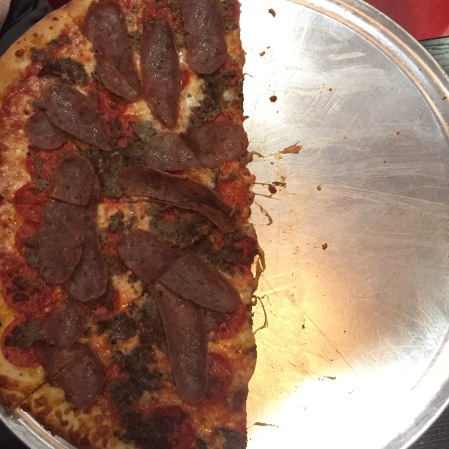 This came piping hot to the table. We had to leave it for a few minutes so we could eat it. The slices are the typical New York size and as usual we both folded the slice in half and eat it. The pepperoni, sausage and meatball combination was very good. There was one thing that Betty Boo picked up, which was that the base was slightly thicker than with pizza found in New York and I would tend to agree. You could eat this pizza without folding it.

Overall I think Sals in Wellington would do very well. The food is good, It is not in a overly complicated space, the prices are reasonable and the food comes out relatively fast. The service is also good, the menu not over complicated and a great place for a late night feed. Simple but effective!