When I was at dinner at Cicio Cacio Osteria with MacGyver, I noticed that they had cards for Bastardo their new restaurant in the CBD. I was intrigued as I really like Cicio Cacio and also heard good things about Franziska. I had not seen Pepper Potts for a while and decided to catch up with her while trying this new eatery out.

This new eatery has taken over the premises of Pan de Muerto. The menu is nicely set out and in English compared to sister restaurant Cicio Cacio. The cuisine “is dedicated to the Italian immigration to New York in the last two centuries“. Apparently Italians were mocked by  the americans and their food is not regarded as real Italian. So the food is dedicated to “creative spirit of adaptation“, which I think is different and a great idea. 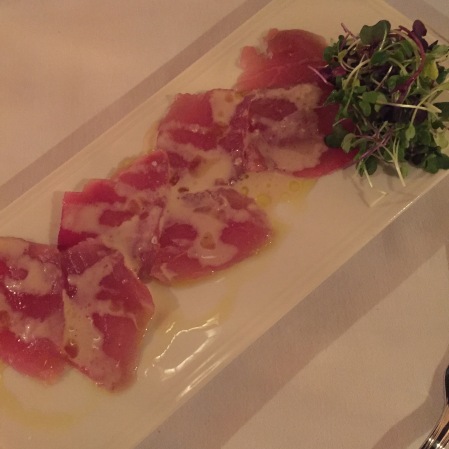 This was beautifully presented, with the tuna very nicely sliced and the emulsion giving contrast to the colour of the raw tuna. Although this dish looked really simple it was beautiful. The tuna basically melted in your mouth and nothing was overpowering and very natural in flavour.

I did not expect this dish to be plated as so, with the mascarpone carefully placed on the bottom with the raw beef on the mascarpone and then artichoke chips placed on top. I really liked the dish. The beef was great and the artichoke chips tasted like they were cooked with garlic. I enjoyed this dish and the flavours. However, I do not think I could eat the whole dish as it was quite rich. 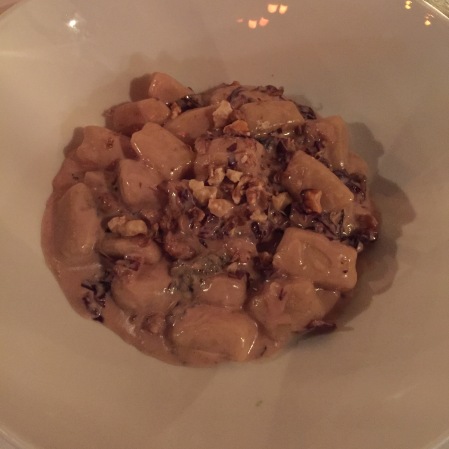 Pepper Potts was looking at ordering one of the two mains we had. As I had the eye on the gnocchi, I decided to order it so she could give it a try. Overall I liked this dish, but at times I did find the radicchio a bit too bitter for the dish if I had to much of it on my fork. The walnuts were nicely roasted and crisp. However, the star of the show was the gnocchi, it was light and fluffy, just perfectly cooked. I did find the dish slightly under seasoned, but I did use the freshly grated parmesan to give it a bit more seasoning.

This was the dish Pepper Potts ordered.  I could not believe how big the piece of salmon was. The vegetable agrodolce was beautiful. It had a nice tang from the tomatoes, but was also sweet. The Salmon was beautifully cooked with the skin so crisp and had a nice bbq taste.  I actually preferred this dish over my gnocchi, even though the gnocchi was really good. 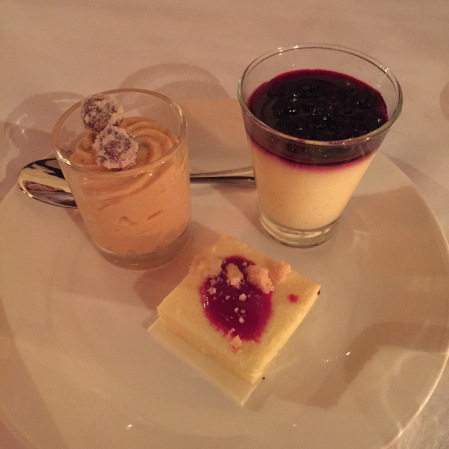 This is came with candied hazelnuts on top. I did like this but was too sweet for me. Pepper Potts really enjoyed this one.

Overall a very nice dinning experience. The service is very good. However, I do wonder if this place will grow in popularity and becomes a stable eatery in Wellington. There is a lot of floor space in this place and quite a few tables.  They also have a nice little courtyard at the front of the restaurant. We got complimentary bread at the beginning with three different types of bread, which was nice. The gnocchi was one of the best cooked gnocchi I have had in Wellington. Will I go back? I am not totally sure. I enjoyed the food and the service, but there are just so many different places to eat in Wellington.