I heard a rumour through the community grape vine that there was a pizza outlet opening in Lyall Bay with the building made out of shipping containers. Over the weeks I drove past and saw it come to shape and finally it has opened. I was slightly surprised that it has opened here. However, I think this place has a lot of potential and is the owners have seen a gap in the market as there are not many food outlets open at night in this area.

One of the coolest things is the menu and how the different pizzas are name after suburbs in Wellington. I do wonder how they named them but it is pretty cool. I love how they named the ham and pineapple (Hawaiian pizza) after Tawa. 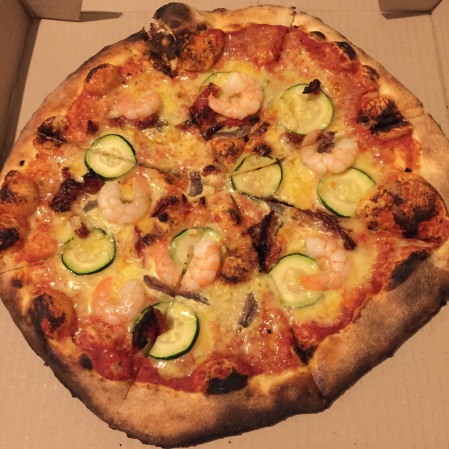 When I opened the box, I was slightly disappointed as there did not look like there was a lot of fillings. However, when I tasted it my eyes deceived me. You could clearly taste the garlic and the anchovies gave the pizza a nice burst of favour when you ate one. The prawns are nice but you thought you would get one on each slice. The zucchini, I think was more of a visual aspect, but the remainder of the mozzarella, tomato base and the olive oil were all very nice additions to make a fantastic pizza.

Overall a good pizza. However, there are a few issues I have with this place. It is not really that cheap. I feel you are paying city prices as if you were sitting in a restaurant. Instead you have to have it takeaway and when you get to eat it, it is not really that hot. You can not do half and half on a pizza and finally you can only get small sizes for lunch time only. Will I go back, not entirely sure. It is a good alternative to Hell’s but I do not eat Hell’s. So I am not sure or maybe I will head to Bel Mondo instead.