Pepper Potts and I were strolling around Courtenay Place looking for somewhere to eat as we wanted to go to a pop-up but it was not happening. I looked through my Entertainment Book App and thought why not try Kazu, which I have not been to for many years. Interesting enough Kazu has been around since 2002 and still going strong with them building their empire around Wellington. I think over time the menu has become more authentic and Japanese people are still going there to eat.

I suspect you do not get these in Japan but maybe a Sweet Potato version. These were really nicely cooked; soft in the middle and slightly crunchy on the outside. The lightly seasoned with salt and had a thin tempura batter on them. Very nice.

I suspected these to be slightly more crunchy. However, they were nicely seasoned and had a good amount of Japanese Mayo on the side. Also, the chili sauce they had on top of the chicken was really nice and as a bonus on the side, they had a few Lotus Root Chips, which were really good. 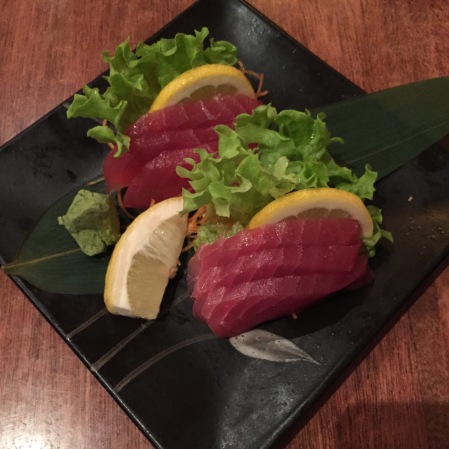 Luckily Pepper Potts decided to ask which fish they recommended and the waiter suggested Tuna as it was fresh today. This tuna was beautiful!

I thought the colors in this dish were really cool and I could not wait to eat the half boiled egg. The soup was really nice and had a really good kick to it, as I stirred in the extra chili sauce into the soup. The cashu (pork belly) was really nice but wished I ordered more. The fungus on the side added a nice earthy taste to the dish. The egg was so good and the ramen was nicely cooked. Overall a very good dish, but I did get a sweat on as the soup was hot and the heaters inside were on full.

After a few years of not visiting, I think I will go to Kazu more often. The food was really nice and fresh. The service was really good and the food came out promptly. We also got asked to full out a survey to help them with their customer service and I could defeat them on their food, price, service, or serving size.  Also for a cheaper alternative they are open at lunch time.