Pickle & Pie is the new kid on the block. With their opening delayed due to the gentrification of Lombard street.  Pickle & Pie has an outdoor dining area and in the near future it will open out to a small park. The interior is nicely decorated with a great natural light and a counter where food is made and where they also sell food. The menu is based on famous New York delicatessens like Katz, which I was excited about as I have actually been there before: Katz Delicatessen 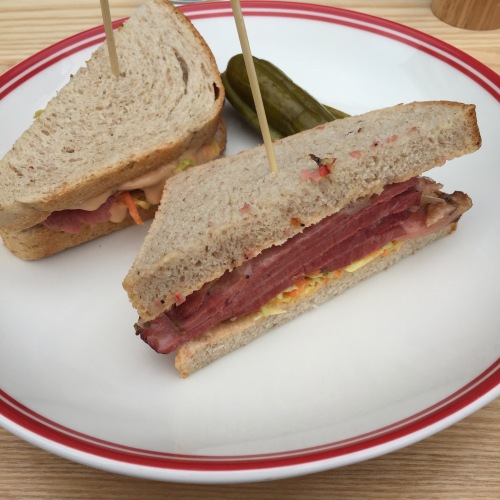 I did wonder how big this sandwich was going to be when it came to my table. However, for the price of $14 I thought it was rather reasonable. The bread looks like it is house-made and a nice strong rye taste to it. The pastrami is very nice and you get quite a few slices of it it. Also inside are some finely cut vegetables that look like coleslaw and dressing. The Rueben as a whole is very nice but what I personally did miss was the sauerkraut and the swiss cheese. Also on the side was some really nice pickles. 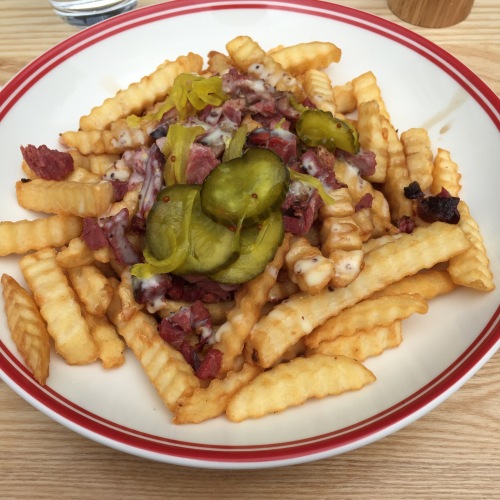 This was awesome. Fries with cheese, gravy and ends of the pastrami all crumbled up with some thin slices of two different pickles. The ratio and combination of the elements worked really well. There was not too much gravy that the fries were soggy, good amount of cheese and pastrami and enough pickles to go around if you wanted some with your fries.  These were some of the best fries I have had in Wellington with stuff on top of them.

I think this place will be very popular. The food is reasonably priced. The service was not bad, especially for a new eatery. The food came out quite fast and I love how open it feels. Also, what I do like is the plates. I know it may not seem much but the red trim around the plate reminds me of the plates new get in New York delis. I will be back as I want to try their cinnamon buns and their coffee.