Found myself in Highpoint in North Melbourne, mainly because I needed to go to the Apple Store. I needed some lunch and was told by Sandy to give it a try. Roti road is part of a new addition to the mall that has an Asian theme with stalls that have a good reputation around Melbourne. 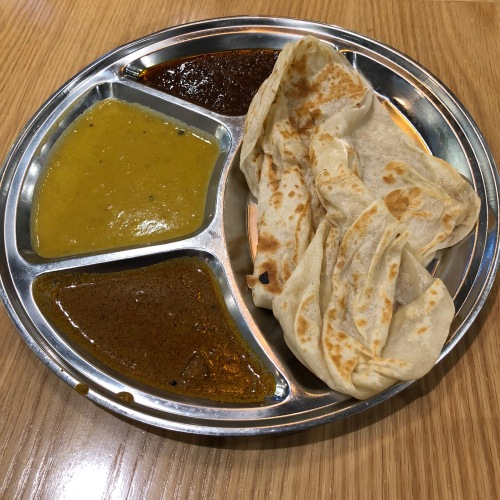 Crispy Out, Fluffy inside, served with a Side of Sambal, Curry and Dhal Lentil

This looked impressive on the plate, as this place also makes the roti on site. Although the roti was crispy, it was not quite fluffy and more on the doughy side. However, the Dhal lentil curry was really nice and had a good thick texture to it, also was the curry, but the side of sambal was the most impressive. 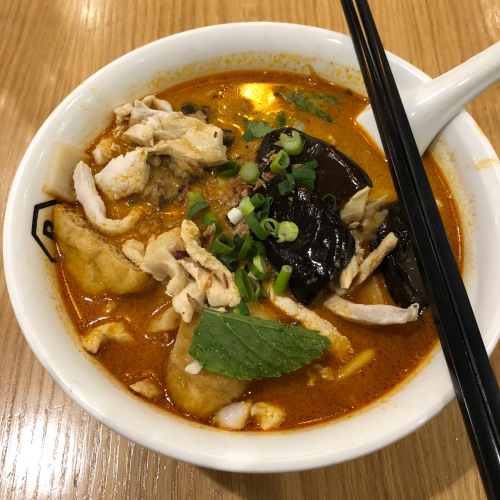 A Malaysian Style Coconut Based Soup with Yellow Noodles

As they serve a Laksa, I decided to continue my Laksa Challenge. It did not look like the most impressive laksa and was surprised to see mint leaves in the bowl. There were quite a few pieces of eggplant, which were not bad (I usually do not eat eggplant as I am not a fan). The tofu was very nice but I had to be careful I did not squirt myself when biting into it. The chicken pieces were nice but would have prefered bigger pieces and the fishcakes were alright but had too much salt and MSG in them. The noodles were really nice and to tie it all together was the laksa soup which was really nice and was shrimp paste base with a nice sweetness. What I really like in the laksa was the mint leaves, which added a very different taste to the laksa, which was great. Overall a really good Laksa.

Although this place was not rated as highly as the original store in Footscary this place is still popular with the local Asian community. The food is good and comes out in a timely manner. You do have to order at the counter here, which was slightly confusing due to the setup of the dining area but was all good once I realised what I needed to do.

When it is family yum cha, we don’t do it in halves and we take it very seriously. Especially if we are there to celebrate something. The name of the game is how high you can stake the bamboo steamers before you take them away. In the second picture there is three but I am pretty sure we got to seven maybe eight.
Made it to the @friedchickenfestnz. I have to say it was a very interesting concept and see why it is a success but I am not entirely sold on it. I love the concept and love being able to eat the different styles of fried chicken but I feel the vendors could have brought more of their “A” game. I thought Salty Diner was the best vendor out of them all, FYI
Found out that Tiger also do a dry version of their Malatang. To be honest, I cannot stop thinking about this place as it is so good and I had discovered another reason to go have it. I went with mild in spice and that was a slight mistake. It totally kicked my ass, but I have to say the dry version is not as good. Not as much flavour and actually just pure spice. Stick to the soup version I reckon.
Oh the hot chocolate @scopacubastreet
Big Breakfast @seashorecabaret
Fish burger @freskosupplies and some calamari.
So lucky to get some kaimoana: pāua. Interesting that pāua is not pronounced "pawa" it is more like "toe" but with a "p".
If I have not said this then I will say it now. The mapo tofu at @_kccafe is legit and the best in town. It is just so good.
Chicken and Waffles @orleansnz
Finally got back here to have a fresh fruit ice cream.