Pepper Pott’s brother Bob (Robert) was down for the weekend and he is crazy about espresso coffee. While he was down Pepper Potts suggested that they should try Goldmine by Lamason and asked if I wanted to tag along, which I happily did. Goldmine has only opened for a few months and brought to you by Lamasons which is in a Laneway in Lombard Street. Mulan’s mum; Fa Li always goes there for her coffee. So it was another reason to try Goldmine out.

with Kimchi, cos lettuce, pickled cucumber, and Korean glaze on ciabatta with fries

Pepper Potts predicted that I was going to order this. It was going to be between this or the Rueben, but obviously, this won out. I was impressed how tall this burger was, but I also knew that it would be difficult to eat by hand. It was also great to see the fries were on a different plate and in their own bowl. The chips were good, but just your standard fries nothing to really rave on about. The burger was crazy. The ciabatta was toasted. The kimchi was good but made out of cabbage. The pickled cucumber did lack the punch I was looking for. The Fried Chicken was slightly overseasoned and rather brown, but the inside was nicely cooked. The Korean Glaze was spread on the bottom of the top bun and not actually covering the chicken. Also in the burger was some mayonnaise or some aioli. Separately, the burger did not work. However, together it did. It actually worked really well. I would only ask for one recommendation to the burger and that is to have the glaze covering the chicken just to make it a bit more authentic. 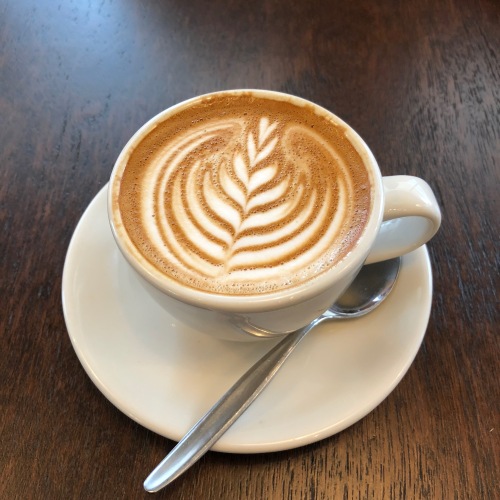 This is above average Flat White. I think the barista did a very good job and knows how to make a good coffee. However, I am picking on the beans. It was not strong enough for me and lacked the depth I am used to in a coffee. The coffee was naturally sweet because of the bean and the milk and did have a toffee taste lingering at the end, but I am not overly a fan of slightly sweet Flat whites. I like my milk to complement and smooth out the edges of a coffee.

This is a great addition to the Wellington dining scene. However, I do wonder how long it will last. The only reason I say that is because Wellington is overcrowded with eateries and it is a fierce competition. I would like it to flourish. The food is great, the coffee selection is good (as you can also have filters and single origins) and the service is really good.