Have been following these guys on Instagram but never really had the opportunity to try them out until today. They have been doing more stints in Wellington lately instead of up North but more recently with Third Eye in Te Aro. They seem to be very popular with them always selling out their food with me trying to get there but I was too late. 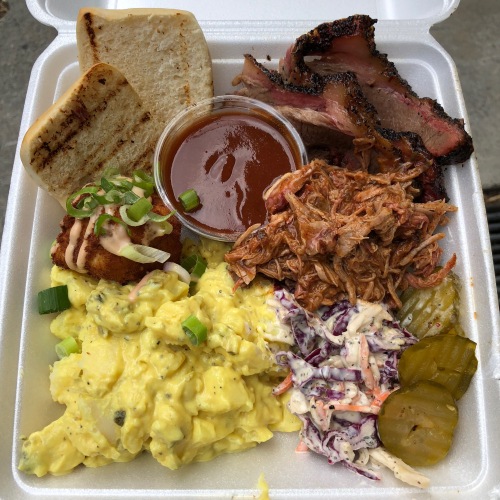 This was jammed pack with substance and I was a happy man. I always hate it when you order something especially takeaway and it doesn’t full the container (as you can always buy different size containers).  The potato salad was really nice and I loved how they did not skimp out of the mayonnaise. There were no pickled onions but there was slaw instead, I initially did not like due to the amount of pepper and vinegar. However, I tried it with the meats and it was really good, especially with the brisket. The Mac n Cheese bite was good and the outside was crunchy, but the inside not as hot as I thought it would be, but still good. The pulled pork was so good and had a nice tang to it. The brisket was outstanding and better than the brisket from Lucky Strike (which I had recently) Finally the extra barbeques sauce was a treat. Whatever they make it from they have the ratios correct. I loved the tanginess, sweetness and the kick that was in the sauce.

Overall, another great addition to the Wellington food scene (I seem to be writing this sentence quite a bit recently). I will try and find them again as I really want to try their brisket cheeseburger. However, the Signature Platter is a great idea when you have no idea what you want to order. The food came out relatively fast but I do suggest if you want to try what they have on offer, go see them in the first hour of serving food.