B1 and B2 told me about this place and wanted to take me. B2 also wanted to go because he had not been. We mainly went because we wanted to try the doughnuts but we didn’t get here until mid-afternoon and they had all sold out which was a shame. As we were there any way we decided to have a snack and a coffee there. 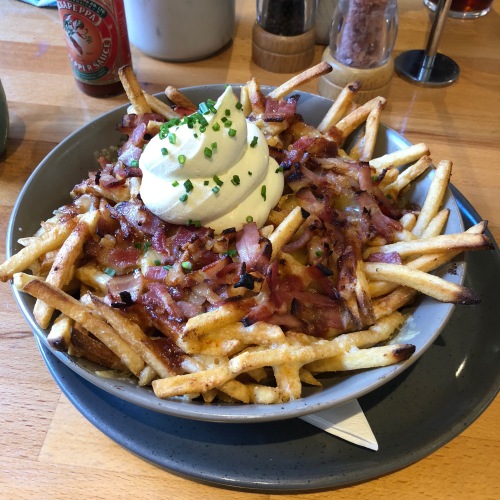 I was surprised how big theses were and also the amount of sour cream on the fries, which was a good quantity. The fries were cooked twice, once deep fried and then under the grill to melt the cheese. This made the fries nice and crispy but surprisingly not dried out. The bacon was good but the barbeque sauce was really good and was a good combination of the sour cream and everything else. These were some damn good loaded fries.

This was really good. A shot of coffee with ice and then condense milk at the bottom and for you to stir. I have never thought of having this cold but it was really good and something I well replicate at home. A great summer coffee drink!

I will need to go back and try the doughnuts as these have become quite famous. However, the food here is good and who’re we were here they wetter smoking some brisket which smelled good. The service and decor is really good and I love the front of the truck in the front of the premises.