Discovered this place when I went to the Saturday Newtown Vegetable Market. It has only been open for a few months and is relatively small but has a really cool street art mural on the wall. The menu is a typical Vietnamese menu, which no real surprises. I have gone there a few times to try the different dishes and see what this place is all about. Also, they are on Uber Eats. 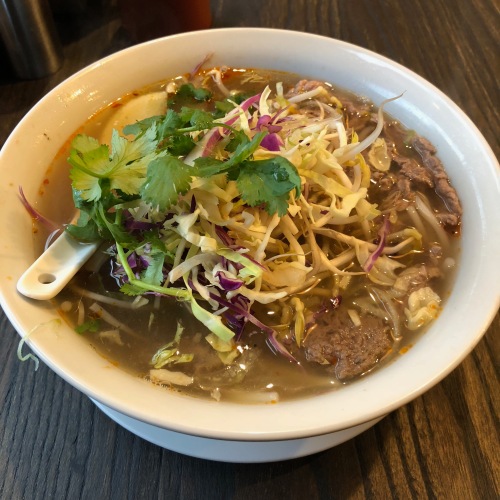 This looked awesome but surprised to see everything was placed in the bowl and not a side dish with all bean sprouts and other raw vegetables and herbs on it. Also surprised to see that it was not swimming with chilli oil, but it did make me wonder if the soup would be spicy. The brisket beef was really nice and the meatballs were really good and flavoursome. The noodles were not flat thin noodles but round and long, which was really nice but different. The soup was really nice and had some spice in it and didn’t have a lot of MSG in it, which I thought was fantastic. Overall a nice dish.

I got these take away with the Bahn mi. These were freshly made as I saw them make it while I was waiting for my food. They were really good, the skins were not too soggy and still a nice firm texture to them. Inside there were; shredded carrot, cucumber, coriander, lettuce and I went with the prawn. The sauce was hoisin based and not fish sauce. Overall really nice fresh summer rolls. 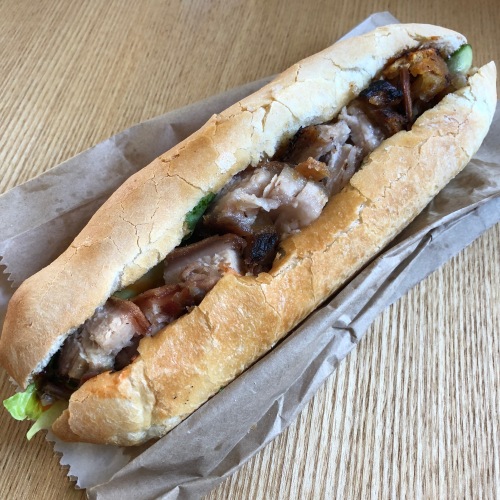 I was slightly surprised when I took it out of the bag. Not because it was packed with pieces of crispy pork but because it did not seem to have a lot of other things that I expected in a bahn mi. There was carrot, coriander and lettuce. However, I expected more to be in there. There was also no option to add chilli into the sandwich but there was definitely pate inside, which was nice. The crispy pork was really nice, slightly too fatty but I loved the crispy pork crackling that was with the pork. Overall good flavour but I want most substance to it.

I went back one evening before I actually posted this blog, so I thought I would add my thoughts on these dishes. I was surprised to get four whole chicken wings on this dish. I love chicken wings and I understand why people find it hard to eat, but the Chinese call this the sweetest part of the chicken and I totally agree.  The chicken was nicely cooked and had a nice flavour with the wings being sticky from the glaze. The only slight downside was how over salty the fish sauce was, but it is fish sauce, so how much can I complain about this.  Overall I really liked these, but I think having it with rice would go down a treat.

I decided to go for the standard Pho but with brisket and added meatballs. I decided the extra meatballs because they were so nice last time and this time they did not disappoint. The brisket was cooked beautifully and had a slightly gelatinous texture to it. Both types of meat were fantastic.  The rice noodles were great, but the raw onion did start to annoy me after a while because there was so much of it. The Pho itself was beautiful and I can see why people are talking about this place. It is just so fresh and so nice.

A nice little addition to the Newtown dining scene. The food is fresh and the service is good. Besides the bahn mi, I really liked their food and will good back to try their other options. Everything was fresh and what is not to like about fresh Vietnamese food.  Also, they are on Ubereats if you want to eat their food at home. Another bonus there is a lack of MSG in their cooking and you do not go away as thirsty as in other places. Total bonus!