Decided to go for an early dinner as Betty Boop, Pepper Potts and I were going to go to a movie. I really had no idea where to go and Betty Boop suggested Lulu Bar, which I had not been to and was interested in going. I had been to the previous restaurant there, Ancestral and just didn’t like it as it was always too dark especially in the restaurant area. However, Lulu has had a slight refresh and just seems a bit lighter and not as wanky as the previous place. The menu is designed to share with a mixture and small plates and between the three of us we decided two smalls and two large plates.

I did not expect to see a thin fillet of salmon. I thought it would be all chopped up and mixed into a bowl with the other ingredients. Instead, the fillet was whole with sesame and coco nibs on top of the salmon. Overall, I really liked this dish I loved how the flavours did not overpower the salmon and I loved the warm flavour from the coco nibs. The wafers were good and the wasabi creme fraiche was nice but did lack the punch I was expecting 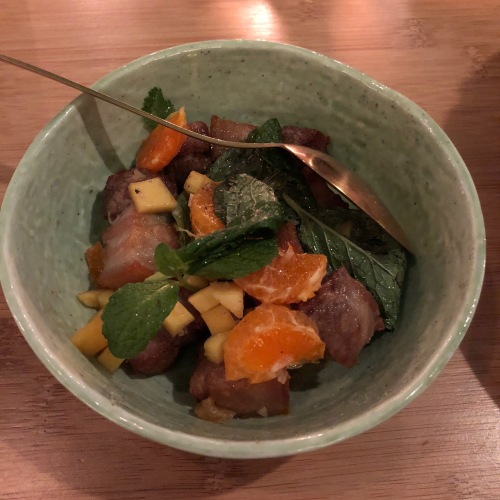 I expected the opposite to how the salmon was served. I thought this would have been served on a long piece of pork belly instead of it chopped into smallish pieces. However, the pork was really nice and I like the seasoning of the plum dressing which made it slightly tart in flavour. I also liked the pieces of orange, apple and the mint.

I was looking forward to this dish the most. The curry sauce was really nice and quite rich with the flavours of the seafood and also the amount of fish sauce in the curry. The prawns were really nice and I loved sucking the prawn heads that packed a lot of flavour. The squid was nice and I really liked the mussels and how they were slightly undercooked, which is better than overcooked. The fish was nice but very hard to comment on as it seemed a lot of it had disintegrated in the cooking process. The dish also came with rice and I loved how it was seasoned with sesame oil and made the rice really fragrant.

Overall I really liked this place. The food was fresh and I love the combination of flavours from the Pacific. The service at the beginning was slow but got better as the night went on. Also as a slight bonus, if you are wanting burgers you can order Boom burgers from next door and had it at Lulu. Overall a good dining experience and I would like to go back and try the lamb covered in ground coffee.