Decided to go to Nando’s for dinner with Pepper Potts. I have only been once since the refurbishment of the Courtenay Eastery and before that, had not had it for quite a few years. Nando’s NZ although is very similar to other Nando’s eateries around the world (as I recently visited the Washington DC eatery. There are a few differences in the sides and the one thing I do wish NZ had was the Portuguese Tarts they have as a dessert option. 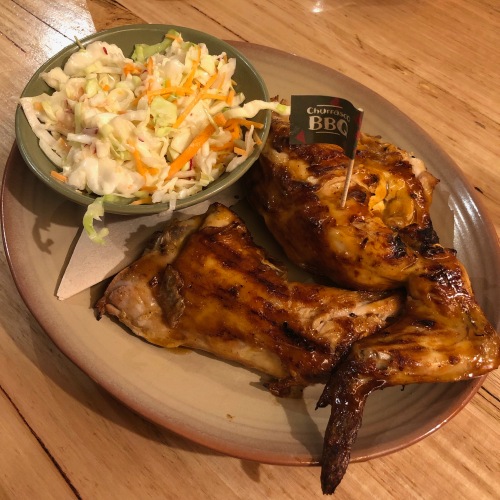 Churrasco BBQ – An enticing sweet flavour, that still has a kick

I decided to go for half a chicken. However, they serve you a size of a small chicken so it is not too difficult to finish. The chicken was nicely cooked. I think Nando’s first power boil their chicken or really soak it for a long time in a brine and then put it on the grill to get the smokey flavour and char it slightly. Getting the chicken grilled with Barbeque sauce was really nice and I then added the different hot sauces on top, which I think is a better way than doing it the other way.

I got coleslaw as the side as I didn’t really want a heavy side and it was really nice and went really well with the grilled chicken. The vegetables were cut more on the thicker side which made it more rustic.

Pepper Potts ordered this and didn’t finish it so I had some. I liked the spice to it, but I am not a fan of non-stick rice.

Overall the Nando’s in Courtenay Place gets rather busy. I did try Nando’s when it first opened and did find it slightly overpriced for what it was, but now I think it works really well. The food comes out surprisingly fast and that is the reason why I think they pre-cook the chicken. The refurbishment of the Courtenay eatery is really nice and surprisingly pulls in more people.