I am a sucker for Jook, especially when in Hong Kong and for breakfast. Jook is the Cantonese version of Congee and usually had for breakfast or when people are feeling unwell. Luckily I was well I just wanted something more traditional for breakfast.

Discovered that there was a good eatery that makes Jook close to my hotel. It is a very typical Chinese eatery, not the cleanest but has good food. The menu outside is in Chinese. I tried to use Google Translate to help me but that didn’t work, so I decided to either wing it or ask for an English menu. They had a menu in English but I still ordered in Chinese, just making sure I was ordering the right thing. 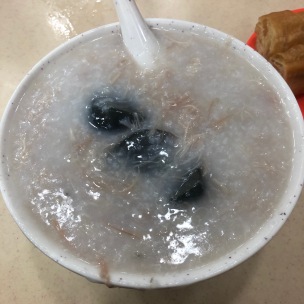 In my Jook I ordered it with Preserved Egg and Meat. I also ordered some fried bread to put into my Jook. The fried bread was alright, I just wish it was slightly heated up as that would of been nicer. The Jook was really nice and had a nice ginger flavour to it. It had a good amount of chicken in there and at least two preserved eggs. Yum.

I do miss preserved eggs, as in New Zealand they are quite expensive and when you order them in Jook they are all shredded up and hardly existent. This place is quite busy and a lot of solo dinners, so expect to share a table. A good breakfast that is also cheap, so I good way to start the day.